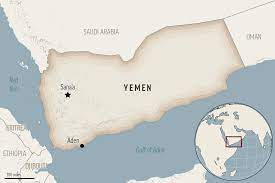 GAZA CITY, Gaza Strip (AP): The Red Cross said Wednesday that it had conducted rare visits to thousands of prisoners on both sides of Yemen’s eight-year civil war, a step that could pave the way for an exchange of detainees between the rival parties.

Fabrizio Carboni, the International Committee of the Red Cross’s director for the Middle East, told The Associated Press that the members of the organization had seen more than 3,400 individuals in a 10-day visit to a facility in Saudi Arabia in December and a separate trip to Yemen’s capital, Sanaa, in October.

He said members of the organization had been allowed access to some of the most “secret and sensitive places” in each country, and will be able to inform many detainees’ loved ones of their whereabouts.

“It means the authorities accept our presence and what comes with our presence, which is the capacity to repeat the visits, the fact that we will inform the families,” Carboni said.

Yemen’s conflict began in 2014 after Houthi rebels came down from the mountains and took control of the capital, Sanaa, and much of the country’s north, forcing Yemen’s government into exile. The Saudi-led coalition then entered the war in March 2015, backed by the U.S. and the United Arab Emirates.

The conflict has since become one of the world’s worst humanitarian crises, killing more than 150,000 people, according to the Armed Conflict Location and Event Data Project. Neither side has released the number of conflict-related prisoners it holds, but tens of thousands are estimated to have been held over the course of the war, many in harsh conditions.

The last mass swap took place in 2020, and overseen by the Red Cross, saw more than 1,000 detainees returned home, in what was hailed as a significant step towards peace. According to a 2018 agreement in Stockholm, the warring sides agreed to swap over 15,000 prisoners, though it’s unclear how many have so far walked free.

Carboni said the prison visits would bolster “confidence-building measures” between the two sides of the conflict, but that it was also a sign of hope to those who remain jailed on either side of the war’s frontlines.

“We await the close of political negotiations toward the release, transfer and repatriation of all conflict-related detainees so they can be reunited with their families after years of separation,” the group said in a statement announcing the visits.

In October, the coalition and the Houthis failed to renew a truce that had been the longest lull in fighting during the war. The ceasefire had initially taken effect in April and had raised hopes of a more durable peace. Since then, the United Nations and other bodies have endeavored to get the Houthis and the Saudi-led coalition to sit down again to discuss a political settlement.

The ICRC, as the Red Cross is known internationally, plays an often-confidential role to check on prisoners of war and regularly oversees exchanges in conflicts around the world. The group thanked both sides in Yemen for cooperating in allowing access to detainees, but urged them to return to peace talks.