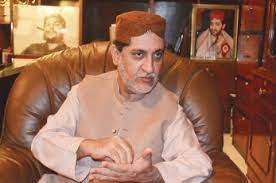 ISLAMABAD: Balochistan National Party (BNP) leader Sardar Akhtar Mengal has summoned a meeting of the party’s core committee to ponder over the coalition with the federal government after developing differences over legislation concerning Reko Diq project, on Tuesday.

Akhtar Mengal called the meeting on December 15 for consultations on the Reko Diq issue and also on the coalition with the government.

According to sources, Akhtar Mengal was not pleased with the way the government handled the legislation without taking them into confidence.

Mengal had also refused to side with the government on the Reko Diq legislation and expressed his reservations on the issue.

The Foreign Investment (Promotion and Protection) Bill, 2022, was railroaded through the parliament on Monday as Senate and the National Assembly gave their approval for the legislation guaranteeing protection of foreign investment in connection with the Reko Diq project.

The government moved with lightening speed and tried to solicit its allies’ nod but failed as BNP-Mengal and JUI-F opposed the bill in the lower house of the parliament while PPP Senator Raza Rabbani and National Party’s Tahir Bizenjo raised their hands in objection to the law when presented in the Senate.

The ruling alliance, while apparently bulldozing the concerns raised by the allies, managed to put parliament’s rubber stamp on the bill on the grounds that the country could not afford to miss the December 15 deadline.

Federal Law Minister Azam Nazeer Tarar presented the proposed law in both the houses, saying the prime minister has directed him to take everyone into confidence on the bill as it is estimated that 30 to 55 billion dollars would come to the country once the deal is signed.

Although the federal government recently got a favourable opinion from the Supreme Court on the settlement agreement for the Reko Diq project, more measures were required before the signing of the pact between Pakistan and Barrick Gold before the December 15 deadline.