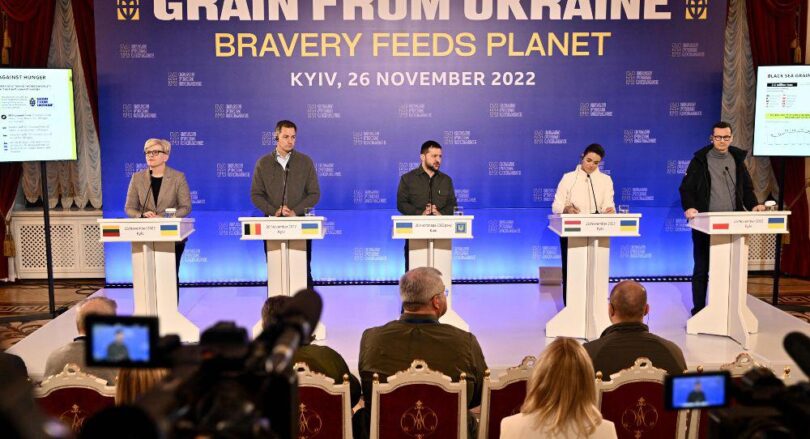 It cannot be predicted how the war in Ukraine will end.
Now in its eleventh month, Russia’s war against a neighbor of the EU has left parts of Ukraine in ruins.
So many civilians have been killed. So many cities, towns, and villages have been destroyed. As winter sets in, so much of the infrastructure has been deliberately targeted. Much of the population is without water, heating, basic services, food, shelter, and safety. Reports from Mariupol which Russia bombed and then occupied in June are shocking.
Russia’s war against Ukraine is not about stopping Kyiv from joining NATO—used by Russian President Vladimir Putin as a justification for invading in the first place. Nor is it about fighting Nazism, another excuse. It is, as Gwendolyn Sasse recently wrote, about “the destruction of the Ukrainian state and the Ukrainian nation.”
It’s not at all sure that all European countries have internalized Putin’s goal. If anything, his unremitting war has opened several important rifts inside the EU. How they will be overcome could determine Europe’s future security architecture.
The first rift concerns the viability of the EU’s soft power.
The EU was created out of the rubble of World War II. Its ideology, for want of a better word, continues to be a peace project.
Leaving aside its economic strength, the EU it is a soft power organization whose security is guaranteed by the United States.
And it is a power in which two former rivals—France and Germany who waged war across the continent over the centuries and who managed to forge a rapprochement after 1945—largely shaped the EU’s relations with Russia.
From the 1960s onward, successive German governments pursued a special policy with the Soviet Union and continued to pursue it with Russia after the end of the Cold War. Wandel durch Handel (change through trade) was not just a slogan. It was about knitting Russia with Germany through gas pipelines.
It is now clear, despite so many unheeded warnings by the Central Europeans, how this dependency became an instrument used by the Kremlin to weaken and divide Europe. Europ-eans are now paying a very high price for Germany’s uncritical dependence on Russian gas.
They have had to scramble to diversify their energy resources that includes buying liquefied natural gas from the United States, Qatar, and other countries.
Some political parties in Europe have accused the United States of taking advantage of Europe’s energy problems—which are of its own doing—instead of acknowledging that such imports are keeping households warm and industry functioning.
Despite the destruction Russia is wreaking on Ukraine, both Chancellor Olaf Scholz and sections of his Social Democratic Party and business lobbies hanker after the status quo ante.
Herein lies the second rift. It is linked to EU member states’ varied historical experiences and the resulting threat perceptions.
The EU as a peace project was finessed over the years without a voice from the Eastern or Central Europeans. They had to endure living under the dictatorship of the Soviet Union.
Today, Western Europe, particularly France and Germany, considers a future European security architecture involving Russia in some form. For the East Europeans, security is about defending themselves against Russia. That is why the latter want Ukraine to win and Russia to be defeated. For them, Russia’s invasion of Ukraine threatens Europe’s stability and security—a threat that would be compounded if Russia were to win.
That also explains why the East Europeans want the EU and NATO to defend Ukraine as much as possible. Their own historical and cultural experiences of living under the Soviet communist system plays a major role in how they see Ukraine’s fight for independence and sovereignty.
Post-1945 Europe had a divided continent in which Western Europe enjoyed a peace project of freedom, democracy, and stability. Eastern Europe lived under occupation and a stability maintained by force. For the East and Central Europeans, when the Berlin Wall was torn down in 1989, the reunification of Europe meant joining the EU and NATO. These two Euro-Atlantic organizations were the guarantors of their security and freedom. Given how Russia is trying to destroy Ukraine, the central Europeans want the same perspectives for Ukraine and other countries in the region. Unlike several West European countries—especially Germany—they do not see the region through the prism of Russia.
These rifts won’t pull the EU apart. But they will deepen and create resentment between Western and Eastern Europe unless there is an awareness between both sides about their different historical experiences and their perceptions of threats, security, and Russia.
The war against Ukraine should be the catalyst for Europeans to understand why their different historical experiences matter and how they could shape the continent’s future security arrangements.