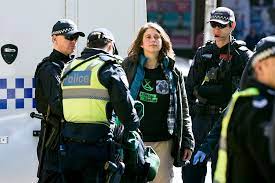 The letter was prompted by the sentencing of Deanna ‘Violet’ Coco earlier this month, following a protest on the Sydney Harbour Bridge.

Coco parked a rental truck on the famed bridge, climbed on the roof and lit a distress flare, blocking one lane for about 25 minutes.

She pled guilty to several offences and was sentenced to up to 15 months in jail, with a possibility of parole after eight months.

The verdict was praised by conservative Australian politicians — including her uncle, a state minister.

But UN special rapporteur Clement Voule said he was “alarmed” at the prison term and denial of bail before an appeal takes place in March.

New South Wales Premier Dominic Perrottet said the protest had been an “inconvenience” for Sydneysiders and the jailing was “pleasing to see”.

Coco will return to court on Tuesday to try to get the bail ruling overturned.

“The vast majority of Australians across the political spectrum support, and voted for, strong action on climate,” the letter from 170 rights groups and prominent activists states.

“People should not be concerned they could risk heavy penalties simply for taking to the streets.”