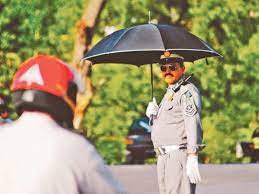 Islamabad capital police have expedited stern legal action against the traffic rules violators and issued 2332 fine tickets to road users during the last 24 hours. Capital Police Spokesman had told the media that Islamabad capital police initiated a campaign for the implementation of the traffic rules and to maintain the smooth flow of traffic in the federal city, while hundreds of challans had been issued over lane and red signal violations, for using a mobile phone during driving, and for amateur driving.

Road Traffic is an important segment of civic life while monitoring, designing, and management of vehicular traffic have become a science in developed nations whereas it has shaped a grave social and administrative problem in developing countries including Pakistan. Once a model city, Islamabad had been a role model for architects and administrators across the country due to its city planning, road layout, street plans and all-weather clean and professionally maintained greenbelts, properly ordained bazaars along with the rule of the law, have now become a pleasant dream for the citizens in the national capital.

Presently, Pakistani cities including Islamabad present a picture of ill organized and uncontrolled wild growth that lacks managers and wardens because of the no implementation of the law. Over the years, Pakistani society has experienced immense moral and social reductions as compliance with the law has been considered a weakness/cowardness while criminals and crooks had been treated as nobles by the society and law enforcers. The state institutions including Police, Juery and CDA law compliance and anti-encroachment cells turned a blind eye toward their responsibilities and promoted corruption and nepotism.

Most of the state institutions are sick and need a comprehensive overhauling of their institutional setup, mission and working methodology so they perform their duties mechanically without waiting for instructions from the top echelons. At the same time, the leaders must also inquire about the unproductiveness of their teams and an upsurge in street crimes and social evils. So, a sense of responsibility and citizens rights and obligations could be instilled in the public servants and common citizens and our nation could join the club of civilized and developed nations in the future.