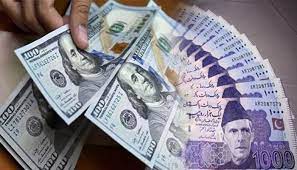 KARACHI: Pakistan rupee recovered late to remain stable against the US dollar at the close of the interbank trading Saturday after losing a little shine in early hours.

Pakistani rupee made a comeback in interbank trading as the greenback gained 6 paisa in its value in early trading.

According to data provided by the money dealers on Monday, the exchange rate recorded a decline of 6 paisa and the US dollar was traded at Rs225 in the interbank trading.

However, at the close of the say, the Pakistan rupee was being traded for Rs224.94 the same as the last day of the precious trading week.

The rupee is under pressure on the back of depleting foreign reserves, falling remittances, slow manufacturing and declining exports.

According to the State Bank of Pakistan, country’s foreign exchange reserves have eased by $12 million to $12.57 billion by week ended December 09, 2022.

Besides this, there is found a sizeable difference in the rate of US dollar in the interbank and open market. The overseas Pakistanis being attracted by the open market rates have started sending their remittances through Hundi and Hawala channels. Hence the decline in the country’s remittances.

Pakistan is also not receiving enough foreign direct investment (FDI) as the central bank on Friday announced that the FDI fell by 51.4 per cent during first five months (July to November) of fiscal year 2022-2023.

At local front, the manufacturing sector is also shrinking. As per the data provided by the Pakistan Bureau of Statistics, large-scale manufacturing (LSM) has contracted by a staggering 7.75pc in October, registering a slowdown for the second straight month.

Since the start of fiscal 2023 (July to October), the LSM has now contracted by an overall 2.89pc.

By not opening the LCs for importers and decelerating the economic activity in country in order to save on import bill and conserve energy, these measures will not augur well for the health of country’s economy and rupee’s stability.