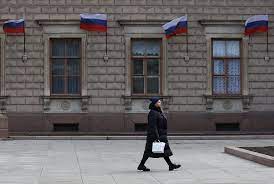 The amendment to Russia’s anti-extremism legislation stipulates that “cartographic and other documents and images that dispute the territorial integrity of Russia” will be classified as extremist materials, the agency reported.

Russia’s sweepingly ambiguous anti-extremism legislation — it applies to religious organizations, journalists and their materials, as well as the activity of businesses, among others – has allowed the Kremlin to tighten its grip on opponents.

The new amendment, TASS reports without citing sources, emerged after its authors pointed out that some maps distributed in Russia dispute the “territorial affiliation” of the Crimean Peninsula and the Kuril Islands.

Russia annexed Ukraine’s Crimea in 2014 – a move rejected by Ukraine and many countries as illegal. Ukrainians and their government have since often objected to world maps showing Crimea as part of Russia’s territory.

Russia and Japan have not formally ended World War Two hostilities because of their standoff over a group of islands just off Japan’s northernmost island of Hokkaido. The Soviet Union seized those islands – known in Russia as the Kurils and in Japan as the Northern Territories – at the end of the war.

The amendment must be proposed to the State Duma, Russia’s lower house of parliament, and after a review go through three readings. It is then sent to the Federation Council, the upper house, and to President Vladimir Putin for signing.

Separately, Russian politicians began debating punishment for Russians who oppose the war in Ukraine and who, as the former Russian President Dmitry Medvedev said, “wish their fatherland to perish.”

Medvedev, one of the most forthright allies of Putin, said that “in times of war,” there are special rules that allow to deal with traitors.

“In times of war, there have always been such special rules,” Medvedev said on the Telegram messaging app. “And quiet groups of impeccably inconspicuous people who effectively execute the rules.”

Medvedev’s rhetoric has become increasingly vitriolic since the war in Ukraine began, though his published views sometimes chime with thinking at the top levels of the Kremlin elite.