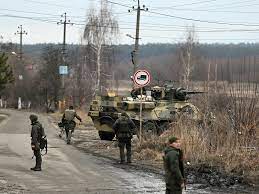 MOSCOW (Agencies): Russian authorities have announced that soldiers and state employees deployed to fight in Ukraine will be exempt from income tax, Moscow’s latest effort to encourage support for a military campaign against Kyiv that has suffered multiple setbacks and defeats.

The new tax measure concerns all Russian troops fighting in the four Ukrainian territories Moscow has declared as its own – Donetsk, Luhansk, Kherson and Zaporizhia – although it does not completely control the four regions. Kremlin spokesman Dmitry Peskov cited an exemption contained in an anti-corruption law, which the Russian authorities published the details.

Soldiers, police, members of the security services and other state employees serving in the four regions no longer have to supply information on “their income, their expenditure, their assets”, according to the decree. Russian forces in Ukraine also have the right, according to the decree, to receive “rewards and gifts” if they are of “a humanitarian character” and received as part of what Russia calls a “special military operation” in Ukraine. Tax relief also applies to the partners and children of those serving and is back-dated to February 24, 2022 – the date Russia launched its invasion of Ukraine.

The Moscow Times reported that Russian President Vladimir Putin signed a decree removing requirements for government officials to disclose their income tax returns for the duration of Russia’s war in Ukraine. “Prior to the decree, Russian law required civil servants to publicly disclose income tax returns for themselves and their immediate family members in an effort to curtail endemic corruption. Military officers were also required to disclose their tax returns when being appointed or dismissed,” the Moscow Times reported.

“The decree also exempts soldiers fighting in Ukraine as well as members of the security services from releasing their tax returns, as well as officials who have travelled to Russian-annexed regions of Ukraine for work,” the Times reported. The Kremlin has rolled out a series of incentives for Russians who fight in Ukraine, offering cash bonuses and promising financial aid to families in the case of the death or injury of loved ones.

Earlier this week, it was announced that Russian soldiers fighting in Ukraine can have their sperm frozen for free in cryobanks. News the Russian state will fund sperm freezing for its armed forces follows reports in October that demand for sperm freezing had increased after Putin announced a partial mobilisation to funnel more troops to support Moscow’s war. Moscow’s mobilisation drive has prompted hundreds of thousands of Russians to flee the country to avoid being conscripted.

Thousands of Ukrainians have also fled to avoid joining the war, Germany’s DPA news agency reported. DPA said that “almost 12,000 men were caught trying to cross the border illegally, heading in the direction of Western countries”. Citing Ukrainian border troops, the news agency said 15 men had died while trying to flee the country to avoid military service, including “two reportedly having frozen to death in the Carpathian Mountains on their way to Romania”.

Ukraine’s Defence minister Oleksii Reznikov has said that, given the extent of Russia’s losses of equipment and troops in Ukraine, it would take Moscow’s army at least five years to recover its former strength. “According to NATO intelligence, the Russians have huge losses of tanks, artillery, armoured personnel carriers and soldiers,” Reznikov was quoted as saying by the media outlet Ukrainska Pravda. “The regular armed forces of the Russian Federation could be restored in five years at the earliest, perhaps not for 10 years,” he said.