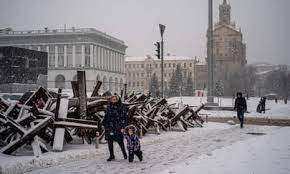 Local officials said infrastructure had been hit in the eastern region of Kharkiv, the Black Sea region of Odesa and in Vinnytsia in west central Ukraine in the lastest big wave of missile strikessince October.

Kharkiv, the central city of Poltava and parts of Kyiv were left without electricity and the northern Sumy region suffered power outages, regional officials said.

Loud explosions echoed through Kyiv, Reuters witnesses in the capital said, and air defenses systems were in operation across Ukraine. Ukraine’s railway operator said a number of railway lines were left without power.

Kyrylo Tymoshenko, deputy head of the president’s office, said a residential building had been hit in the central city of Kryvyi Rih, where he said people could be trapped under the rubble.

There was no immediate word of casualties and it was not clear exactly what critical infrastructure had been hit.

Russia, which invaded Ukraine in February, has been attacking Ukrainian energy infrastructure since October, causing repeated power outages across the country at the start of winter.

Moscow says the attacks on basic infrastructure are militarily legitimate. Ukraine says attacks intended to cause civilian misery are a war crime.