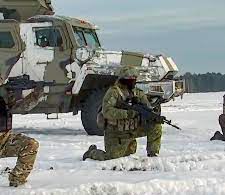 MOSCOW (Agencies): A train carrying Russian troops and equipment has arrived in Belarus amid concerns that Moscow could use its ally’s territory to attack Ukraine from the north. The Belarusian defence ministry confirmed the arrival of the contingent on Friday and said President Alexander Lukashenko had visited a military base where Russian troops are already stationed.
During the meeting, Lukashenko and an unnamed representative from the Russian army discussed the two countries’ joint military drills, it said. Russian troops “are ready to carry out tasks as intended”, the representative said. The developments came after Belarus, which has backed Russia over its war in Ukraine, said that it will receive more weapons and equipment from its neighbour as the two continue to boost military cooperation.
The Belarusian defence ministry said the goal of creating a joint force was “strengthening the protection and defence of the Union State [of Russia and Belarus]”. “Personnel, weapons, military and special equipment of the armed forces of the Russian Federation will continue to arrive in the Republic of Belarus,” the statement said. The two countries are preparing for joint air force exercises, the ministry said, without providing any further details.
The Belarusian government has repeatedly said the country will not join Russia’s war in Ukraine. But Moscow deployed thousands of forces to Belarusian territory under the pretext of military drills before launching its offensive and then funnelled troops into Ukraine when its invasion began on February 24. According to Kyiv, Russia continues to use Belarusian airspace for drone and missile attacks. Any new attack on Ukraine from Belarus would open a major new front in the war, which has killed tens of thousands of people.
Lukashenko has blamed Western nations for the war, accusing them of seeking confrontation with Russia and provoking the ongoing bloodshed. The 67-year-old says Ukraine has the power to end the conflict by accepting Moscow’s demands – namely the loss of partly-occupied regions in eastern and southern Ukraine. Meanwhile, the United States is of the view that Russian President Vladimir Putin’s ally Yevgeny Prigozhin, the founder of Russia’s Wagner Group, is interested in taking control of salt and gypsum from mines near the Ukrainian-held city of Bakhmut, a White House official said.
There are indications that monetary motives are driving Russia and Prigozhin’s “obsession” with Bakhmut, the official told the Reuters news agency. The US has previously accused Russian mercenaries of exploiting natural resources in the Central African Republic (CAR), Mali, Sudan and elsewhere to help fund Moscow’s war in Ukraine, a charge Russia has rejected as “anti-Russian rage”. Out of Wagner’s force of nearly 50,000 mercenaries, more than 4,100 have been killed and 10,000 others wounded in Ukraine. Of them, more than 1,000 were killed between late November and early December near Bakhmut, the official said.
The Institute for the Study of War (ISW) said that the Wagner Group is likely in need of new forces due to its heavy losses in Ukraine, particularly of former prisoners who were released from jails in Russia and agreed to fight with the promise of earning a pardon. Prigozhin, who has been sanctioned by Western countries for his role in Wagner, was featured bidding farewell to former convicts who had served out their contracts in Ukraine and urged them to avoid the temptation to kill when back in civilian life.
The Wagner chief likely engaged in publicising the “supposed pardons to augment the Wagner Group’s recruitment campaign in Russian prisons”, the ISW said, and to reassure the reported “80 percent of deployed Wagner Group personnel in Ukraine who have been promised some type of legal reward for their participation in hostilities”. “Prigozhin has increasingly pinned his standing in the Russian ultra-nationalist pro-war community on the Wagner Group’s ability to capture territory and, particularly, on its offensive on Bakhmut,” the institute added.
“Prigozhin likely intends to further motivate Wagner personnel and generate new paramilitary forces in a misguided and implausible effort to reverse the culmination of the Bakhmut offensive.” The White House said late last month that the Wagner Group took delivery of an arms shipment from North Korea to help bolster Russian forces in Ukraine, a sign of the group’s expanding role in that conflict.
The mercenary force emerged publicly for the first time during Russia’s invasion and annexation of Crimea in 2014. Then, from 2015 onwards, Wagner appeared wherever Russia had geopolitical interests: first in Syria’s civil war on the side of President Bashar al-Assad, then Libya, CAR, and Mali, among other countries. Prigozhin, who served nine years in prison in Soviet times for robbery and other crimes before going into business during the 1990s, last year admitted interfering in US elections and acknowledged for the first time his role in founding Wagner.