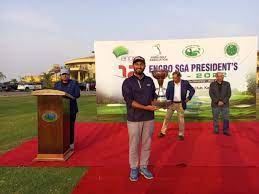 Karachi: Final round of the 12th Engro SGA President Cup 2022 was played on Sunday at Defence Authority Golf Club. The main category was Amateurs HC 0-5 and winner of the championship with net score of 206, 10 under Par was Arsalan Mughal from KGC. Arsalan is the trophy holder for this tournament.

Saim Shazli of KCG maintained lead throughout the tournament and is the winner in Amateurs 0-5HC category with a gross of 213, 3 under par. Yashal Shah, also from KGC is the runner up in this category. Sameer Syed and Samir Feroz, both from KGC are winner and runner-up in Amateur net.

Aania Farooq from Airman Club is the new leader in Ladies 0-12 HC gross category. Abiha Hanim Syed from DHA Club is the runner-up. In the net category, Amna Amjad (KGC) and Humera Khalid (DHA) secured first and second position correspondingly. In Ladies 13-36 HC gross category, Tabassum Sharif (KGC) won the trophy, with Anum Zahra and Nida Haq both from DHA at the second and third position.

Major Rizwan Farooq of DHA Club is the new trophy bearer in Veterans 70-75 years Gross category, with Brig Latif Butt also from DHA as the runner-up. Net category has Mir Ali Raza of Airmen Golf Club as winner. Sherjan Tajik of DHA was the runner-up in this category winning over Captain Safdar Amin in a tie breaker.

In the Junior’s under 14 Gross category, Waleed Bilal from KGC became the new leader and Nyle Aurangzeb from DHA got the second position. The net category has M Hamzah Sheikh and M Shaffay Ali as winner and runner-up respectively. Chief Guest at the ceremony was Rizwan Masood Raja, Chief People Officer of Engro Corporation who distributed prizes amongst the winners. Rizwan congratulated Sindh Golf Association on successfully holding the 12th Engro SGA President Cup and assured of Engro’s cooperation in future as well.

SGA President Khurram Khan thanked the sponsor for support and congratulated all the winners. Khurram said, “On behalf SGA I would like to sincerely thank Secretary DHA Golf Club- Brigadier Ahsan Masood, his team on providing us the golf course in such good shape. I would also like to thank Secretary SGA- Col Zahid and all officer bearers. SGA leadership would like to appreciate the efforts and hard work of our team including Commander Shazli Azhar, Baseer and Roshan for making this tournament a success.”

Secretary SGA Col Zahid said, “We have been speaking with international golf associations for training of Pakistani golfers.
Very soon we will see global trainers coaching our young girls and boys in Karachi.”