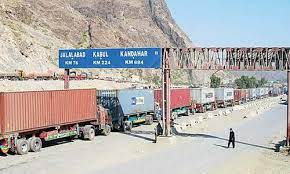 PESHAWAR: Sarhad Chamber of Commerce and Industry (SCCI) underscored the need of bringing relaxation in visa policy, besides taking of pragmatic steps to quell out of related factors that were creating hurdles in smooth issuance of visa to the business community so that bilateral trade between Pakistan-Afghanistan would be boost up trade at optimal level.

Shahid Hussain, senior vice president of the SCCI in a press statement issued here on Wednesday underscored the need of focusing on bringing relaxation and improvement in visa issuance to Afghans and traders’ than holding conferences.
It is imperative to ensure issuance of visas to citizens and traders communities of both countries without any hurdle, the SCCI senior office bearer commented.

However, he made it clear that if such steps aren’t taken, the likely convening of conferences will not bear any fruits and won’t gain desired results/objectives.

Giving reference to a recent survey report, Mr Hussain said Pak-Afghan bilateral trade volume that stood at $2.5billion in 2012 that has been dropped by $6million in 2022, which is highly worrisome and a matter of grave concern.

It is reportedly that alleged $1000 illegally is being charged on issuance of visa to Afghans and traders, citing that some local and foreign elements and factors are allegedly involved in this illegal practice, the SCCI SVP elaborated.

Hussain questioned: “What expectation can be attached with regard to Pak-Afghan bilateral trade promotion under the prevailing circumstances”? He added the denial from these facts and ground reality, is equally tantamount in wild dreams.

He went on to say that Afghan traders and people can buy and transport themselves if they were provided a visa by relaxing policy.
There is neither issue of language, identification of locations and ways nor required any guidance for roaming to Afghans people in various cities of Pakistan, he added.

However, he said the only thing which is needed for Afghans is a smooth issuance of visa on simplified procedures and a prompt manner.
The SCCI senior office bearer asked to focus on bringing relaxation and improvement of visa issuance to Afghans instead of wasting time in conducting conferences, according to Mr Ishaq, such meaningless initiatives would further drop the Pak-Afghan bilateral trade.
Shahid Hussain asserted that collective policies would be proved a catalyst to enhance Pak-Afghan mutual trade and onward trade to

Approximately CARs market is $100billion, in which Pakistan’s share is completely negligible, Hussain noted. He said Pakistan has also been ignored due to various factors in this regard and citizens/traders of CARs states await for visa facility for two or more months.
He asked: “Who will come in the current scenario in Pakistan”?

The SCCI senior office bearer urged concerned authorities in Pakistan and Afghanistan to take consistent and regular initiatives to facilitate the business community and jack up bilateral trade volume between the two countries.