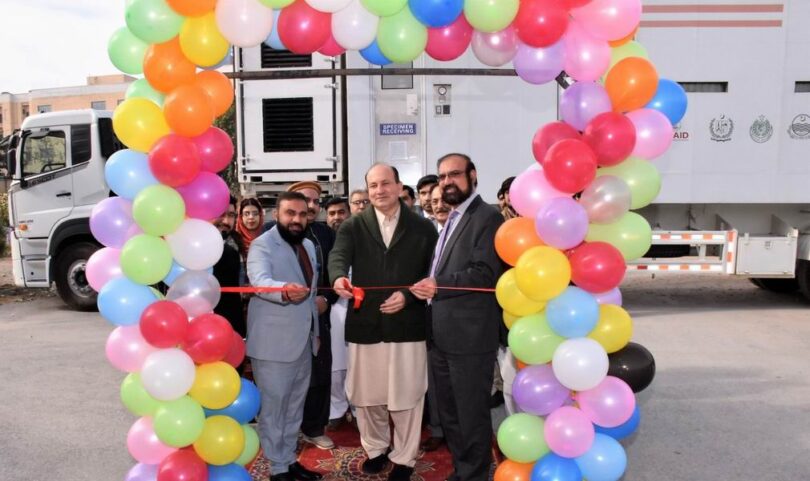 PESHAWAR: The Secretary of Health Khyber Pakhtunkhwa Aamir Sultan Tareen on Tuesday said that he will talk to the federal government to make the Liver Transplant Institute being built in Khyber Medical University (KMU) Peshawar functional as soon as possible.

The outstanding services rendered by KMU in the field of clinical and basic medical sciences as well as public health during the last few years are commendable.

He expressed these views as chief guest at the inauguration of KMU Mobile Laboratory, visit to Liver Transplant Institute, signing of Memorandum of Understanding between KMU and Faisalabad Medical University for adopting of MBBS modular curriculum and completion of four-year degrees under the higher education commission scholarships scheme to Afghan students.

Aamir Sultan Tareen said that KMU has proved with its outstanding performance that it is not just a degree-granting institution, but a center for knowledge and research as well as tackling the serious health challenges faced by society as a policy-making body.

He said that the KMU mobile lab will open new avenues to deal with any possible pandemics and outbreaks in remote areas and help the health department in this regard. He thanked USAID for donating the mobile lab to KMU and hoped that this lab would help the people in the remote and backward areas of the province in the timely diagnosis and treatment of various diseases.

He said that it is a matter of honor not only for KMU but for the entire province that the MBBS modular curriculum designed by KMU is being provided to Faisalabad Medical University after Bolan Medical University and it is another outstanding achievement under the leadership of its dynamic and young vice-chancellor.

Secretary of Health said that close links between medical educational institutions across the country will not only help in understanding each other’s problems but will also create opportunities to jointly deal with the challenges faced in the health sector.

Afghan Consul General Hafiz Mohibullah while addressing the event said that the joy he is feeling on the participation of Pakistani and Afghan students in this joint event is indescribable. He said that educational institutions have a fundamental role in the formation of societies.

The relationship between teacher and student is like the sacred relationship of spiritual father and son. We have to inform our new generation about the role and achievements of our forefathers for success in this world and hereafter. Our role model is not the Western civilization, but the good deeds of the Prophet and the lives of the companions are a beacon for us.

He said that the support given by the people of Pakistan to the Afghan refugees against Russian and American aggression is a practical example of brotherhood for the whole world. We have a common religion and belief, he added.

Hafiz Mohibullah thanked KMU and the Government of Pakistan for providing educational facilities and scholarships to Afghan students in various fields and reiterated all possible support from the IEA in establishing the proposed campus of KMU in Kabul.