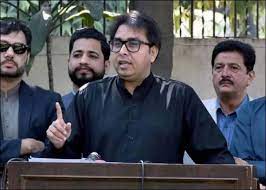 ISLAMABAD : A district and sessions court in Islamabad heard the sedition case against Pakistan Tehreek-e-Insaf (PTI) leader Shahbaz Gill on Monday. The hearing of the case was held in the court of Additional Sessions Judge Tahir Abbas Sipra.

Public prosecutor Raja Rizwan Abbasi appeared before the court. No one had appeared before the court on behalf of Shahbaz Gill till the filing of the report. During the hearing of the case, Judge Tahir Abbas Sipra remarked: “Ammad Yousaf says that the programme-in which Shahbaz Gill allegedly incited the junior officers of Pakistan Army against their senior command-had been aired from Islamabad, and he has nothing to do with it.” He added: “Ammad Yousaf asserts that any move for his indictment is not right.” (INP)