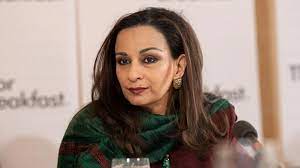 ISLAMABAD: Federal Minister for Climate Change and PPP Vice President Sherry Rehman has said that President Arif Alvi’s statement that the PTI was helped by the former army chief during general and Senate elections was a charge sheet against Imran Khan.

“Chairman Bilawal Bhutto Zardari had said on the floor of the National Assembly on the very first day that he was a “selected” prime minister. Though belated, Arif Alvi has confessed that Imran Khan was a selected (premier). Now on one hand, he (Imran) is blaming the establishment and on the other, he is asking it to play a political and administrative role.

“Imran Khan is instigating state institutions to interfere in the political and administrative matters and play an extra-constitutional role to bring him to power. Imran Khan has got used to doing politics on crutches. He should avoid making institutions a part of his political narrative.”

However, according to the APP, President Dr Arif Alvi on Monday rebutted a statement “wrongly attributed” to him regarding the alleged support extended by then army chief General Qamar Javed Bajwa to Pakistan Tehreek-e-Insaf during polls.

“President Dr Arif Alvi has taken notice of the statement wrongly attributed to him about the alleged help extended by the former Chief of Army Staff, General (r) Qamar Javed Bajwa, and his team in the Senate, and their help to Pakistan Tehreek-e-Insaf (PTI) during the elections also,” the media wing of the President Office said.

“The statement has been quoted out of reference to the context and is twisted and self-concocted,” it said.

Earlier, a section of media reported that President Alvi disclosed that the former army chief and his team helped Imran Khan during general and Senate elections.

Reportedly, Alvi made this revelation during a dinner hosted in his honour a couple of days ago. During his talk with journalists, he confessed that the former army chief and his team helped the Pakistan Tehreek-i-Insaf during general elections.

The president, however, advised the political parties to forget the past, forgive and take a fresh start. He said he urged both the government and opposition to find a middle way and hold elections by the end of April or in May.

On the emergence of frequent audio and video leaks, President Alvi expressed his concern. He said that he had talked to the new army chief in this regard.

“I wonder why this thing is going on. This should come to an end,” he accentuated.

Meanwhile, President Alvi held a meeting with Sindh Governor Kamran Tessori on Monday and discussed the development projects in Karachi.

They also held discussion on the political situation.