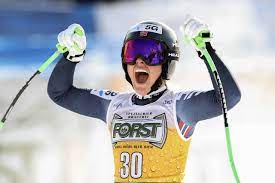 CORTINA D’AMPEZZO (AP): Mikaela Shiffrin will have plenty more chances — better chances, actually — to claim a record-breaking 83rd World Cup victory.
After missing out on the podium on Friday and Saturday in two straight downhills — far from her best event — she’ll expect more for upcoming races in disciplines that she excels in.
The Cortina weekend wraps up with a super-G on Sunday then there are two giant slaloms in nearby San Vigilio di Marebbe on Tuesday and Wednesday before two slaloms in the Czech Republic next weekend. Of Shiffrin’s 82 wins, 51 have come in slalom, 17 in giant slalom, five in super-G and only three in downhill. She’s also won a combined and a handful of parallel and city races.
“I am enjoying each race and the process is like an opportunity,” Shiffrin said after a seventh-place finish on Saturday. “I don’t feel that I have to win again. Of course I care. I want to win. That’s obvious. But I don’t feel that I have to win; that I’m supposed to win. I’m just here trying to figure out the track like all the other racers on the course and see if I can do my best and if it’s good enough to be close to the top. “Maybe sometimes it is the fastest run. And that’s that’s the best place to be,” she added. “When I look forward I see opportunity, but I don’t see pressure.”
Having matched former teammate Lindsey Vonn for the women’s record at 82 wins each by claiming a giant slalom in Kranjska Gora, Slovenia, earlier this month, Shiffrin then finished second in a slalom in Flachau, Austria, and fourth in the first of the two Cortina downhills on Friday. In her latest record attempt, Shiffrin finished 0.39 seconds behind Slovenian winner Ilka Stuhec on the course that will be used for the 2026 Milan-Cortina Olympics.

While Shiffrin made a slight error during Friday’s downhill, she didn’t appear to make any significant mistakes in this race but still didn’t have enough speed in a discipline that is far from her best.

Stuhec finished second behind Goggia on Friday but hadn’t won a World Cup race since December 2018.

The Olympia delle Tofane course was shortened due to wind, removing the course’s most characteristic section, the Tofana Schuss or “chute” between two walls of rock.

About a third of the course was eliminated.

Goggia lost control while landing a jump, got twisted around, slammed through a gate and slid down the mountain before quickly getting up and skiing down to the finish, where she waved to the crowd to say she was OK.

The safety air bag under Goggia’s racing suit inflated during her crash, which may have helped soften her crash landing.

“I really just made an error. It wasn’t a concentration lapse,” Goggia said. “It went well in that nothing happened.”

Goggia broke two fingers in her left hand during a downhill in St. Moritz, Switzerland, last month, then returned after a quick surgery to win another downhill a day later. She also crashed nastily in a super-G last weekend in St. Anton, Austria, but avoided injury.