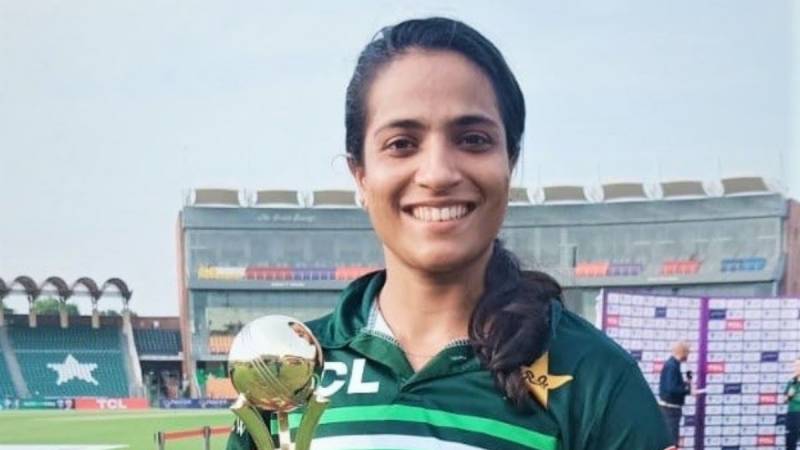 LAHORE: The International Cricket Council (ICC) has awarded Pakistan opener, Sidra Ameen, with the Women’s Player of the Month award for the first time after her stunning display with the bat in November.

Sidra scored 277 runs in the home ODI series against Ireland, including the fifth-highest individual score in women’s ODIs in the first match in Lahore.

Sidra scored an unbeaten 176 off 151 balls against Ireland. Her partner Muneeba Ali also scored a hundred in that game, in a record-breaking 221-run stand for the opening wicket.

Sidra’s 176 was also the first score greater than 150 in women’s ODIs by Pakistan. Ameen made another brilliant contribution in the series at the same venue, making 91* in the second match as Pakistan completed a series victory.

Ameen also rose to 22nd on the ICC Women’s ODI Batting Rankings and is the highest-ranked Pakistan batter on the list.
The Pakistani batter expressed great thrill at being awarded the monthly award. “I feel great to have won this award,” she said. “It is also special following my teammate Nida Dar who won the award for October.

“This shows our team has displayed some great performances in the past few months in international cricket. I would like to dedicate this award to my parents and to everyone who has always supported me and prayed for my success. My performance with the bat against Ireland which helped the side claim the sweep over Ireland in the ODI series at home will always remain close to my heart. Individually, this year has been great for me, I have scored three ODIs centuries and all coming this year. And to top it off, ending the year by winning the ICC Women’s Player of the Month for November is just amazing.”

“When you get an opportunity to score a hundred it is a special moment, but for Sidra to go on and make it a big one, 176 and then to back it up with 91 in the very next match, this shows not only that she has the skills, but she has the temperament.”,” said ICC Hall of Famer and member of the voting panel Lisa Sthalekar.

England captain Jos Buttler claims the ICC Men’s Player of the Month award after being at his remarkable best with the bat in his side’s charge to T20 World Cup triumph in Australia last month.

England’s triumphant skipper Buttler once again underlined his reputation as one of the most fearsome batters in world cricket last month. November started with a Player of the Match performance in the dramatic 20-run victory over New Zealand in Brisbane. Making his 100th T20I appearance, the opener smashed 73 from 47 balls to provide some much-needed momentum to England’s campaign.
After England had secured their passage to the knockout stages, he followed this display with arguably his highlight of the tournament. Chasing 169 for victory in the semi-final against India, he demonstrated the full array of his strokeplay in smashing 80 from 49 balls. His record-breaking opening partnership of 170 with Alex Hales saw them claim a historic ten-wicket win in Adelaide.

Even though his scoring in the Final was somewhat quiet by his standards, Buttler registered a valuable 26 runs against a menacing Pakistan bowling attack. He then led the efforts in the field with his expert captaincy, forcing Pakistan to fall short, and claiming England’s second ever T20 World Cup trophy.