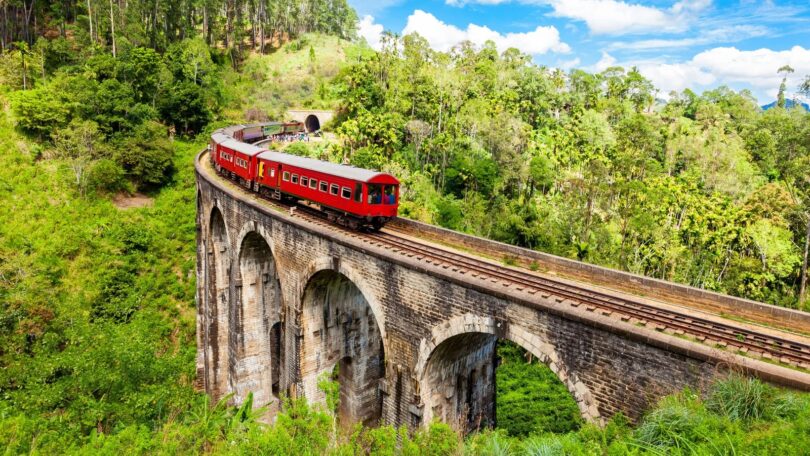 I was woken by the long, forlorn sound of the siren. The brakes hissed and screeched as our train chugged up the hill and pulled into Radella, a station along one of the most beautiful train journeys in the world: the Colombo to Badulla railway.

“The journey is so enthralling that you don’t want to take your head out of the window,” said Dayawathie Ekanayake, who has travelled extensively by train across the island during her career as a finance consultant. “It makes you feel constantly in awe. You wonder about what comes next – is it a waterfall? A stupa-like tea garden? Or is it mist-clouded peaks? You never know. You just have to keep looking.”

Since my first journey along this route seven years ago, I have returned numerous times, eagerly jumping off the train to explore towns and hamlets flanked by tea estates. The 291km track takes in a mix of deep gorges, craggy cliffs, cascading falls, lakes and rivers from Sri Lanka’s west coast into its mountainous interior. It twists and turns through 46 tunnels, snaking past high montane canopy with bright red rhododendrons and wild ferns, a fragment of the native hill country forest cover left untouched by British colonisers. On a bright day, sun-drenched hills stretch down to the glistening southern coastline from the train window as far as the eye can see. 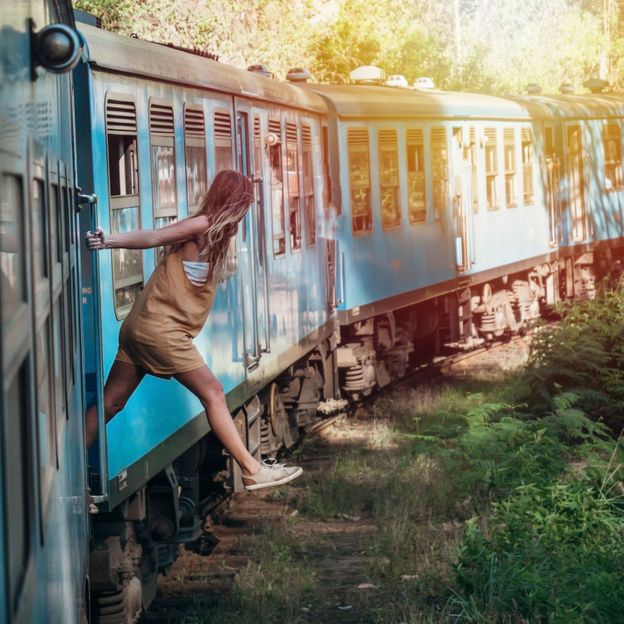 This slow, 10-hour long journey might be inconvenient for the modern-day traveller, but it’s so enchantingly scenic that it’s become a bucket list adventure for many visitors.

It’s not just the views that has travellers in awe. The train journey itself has become an Instagram sensation in recent years, with travel bloggers risking their lives to take photos of themselves hanging off the door as the train rumbles past rickety bridges (some of them have been criticised for their dramatic poses). Yet, the journey is also tied to Sri Lanka’s colonial history and gives passengers a deeper understanding of the island-nation.

During British colonisation in the 19th Century, Sri Lanka was the third-largest coffee exporter in the world. As demand rose, it became expensive to ferry coffee on bullock carts from the central mountains to Colombo for shipment, especially with road conditions deteriorating during the monsoon months. Estates had to therefore store their coffee for long periods of time, causing the quality and value to deteriorate. So British estate owners pushed for a rail system to transport coffee. In 1867, the British completed a railway from the city of Kandy in central Sri Lanka to the coastal city of Colombo.

I boarded the train in Colombo, leaving the muggy heat and low country farmlands to slowly ascend towards the rocky mountains surrounding Kandy. Cutting through rugged terrain, the train climbed 426m over a 21km stretch, passing through 12 tunnels, hugging treacherous curves along the mountains and soaring above thick tropical jungle.

After leaving Kandy, we passed fertile riverine valleys, and entered Sri Lanka’s hill country. Tea flourishes in these damp, wet highlands, so, “when tea became prominent, after the coffee rust epidemic – a fungi disease that hindered the coffee trade [in 1869] – the British wanted to extend the railways to transport tea from the mountains to Colombo,” Abeysinghe explained.

In the 1870s, the British began to expand the railway from Peradeniya, a railway junction near Kandy, extending the route to the terminal station Badulla in 1924. This 178km-long stretch involved navigating through rainy, forested mountains, steep ridges and a series of sharp twists and turns by building an impressive mix of bridges, viaducts, tunnels and embankments. It took 52 years to complete.

We pushed out of the mountains, and over the next three hours we passed small and well-kept British-era railway stations like Galboda and Watawala, which were built solely for the purpose of transporting tea from each estate. We sluggishly ascended past Hindu temples tucked in tea gardens, small housing settlements where the tea estate labourers live, and turpentine forests shrouded in swirling mist. Sometime after leaving Hatton – the gateway town to Adam’s Peak, a holy mountain for pilgrims of all faiths – we entered the Poolbank Tunnel, the longest of the 46 tunnels at more than half a kilometre in length.

“You cannot really see the light at the end of the tunnel here,” Abyesinghe said, chuckling.

At Nanu Oya, visitors can tour the plantations and learn about the history of tea on the island (Credit: Saiko3p//Getty Images)

From here, young passengers eagerly hung from the door to see the gushing cascades of the spectacular St Clair’s Falls through tea bushes. Cold air drifted in from the open windows and rising mist cloaked the towering Great Western mountain range. Many passengers got off the train at Nanu Oya, a tea-country town where visitors can tour the plantations and learn about the history of tea on the island; but I stayed on board, climbing up to Pattipola, the highest broad gauge railway station in the world. From here, we finally left the cold central hills, travelling past dairy farms towards the sun-drenched south-eastern mountains.

After a couple of hours later, we pulled in at Ella. Over the last decade, this once-sleepy village has turned into a lively tourist hub with cafes and bars lining the streets and people posing for photos in front of the picturesque Nine Arch Bridge, a viaduct with nine arches that soars over tropical jungles of plantain trees and areca nut palms and has become one of the most photographed spots on the island.

Flanked by thick jungle and tea plantations, the bridge was designed by British engineer Harold Marwood, but according to folklore, it never would have been built were it not for local knowledge.

It’s said that during World War One, when it was difficult to source steel from Europe, British engineers had to rethink the bridge design. Since colonial rulers had little to no knowledge about local construction materials, a Sri Lankan builder chipped in to help. Locals completed the engineering marvel using only bricks, stone and cement.

Nine Arch Bridge is one of the most photographed spots in Sri Lanka (Credit: Nathan Mahendra)

Looking out of the train window, I gazed at the 90m-long viaduct rising through the trees, connecting Ella to the highland town of Demodara. The British also needed a way to manage the steep incline of the terrain from here. “The climb was too abrupt to handle for the engines,” Abeysinghe said.

Again, folklore gives credit to locals who found a way to solve the problem by creating a spiralling track. As we reached Demodara Loop, the train halted at Demodara for passengers to deboard, snaked around a hillock and re-appeared from a 134m-long tunnel right beneath the station.

According to legend, local engineer DW Wimalasurendra worked at the site and thought of this spiral design after seeing a kankami (a tea estate worker who manages South Indian labourers) tying and re-tying his turban. The cutting-edge engineering allowed the train to avoid the steep climb.

The spiral track at Demodara Loop is said to have been inspired by a worker tying and re-tying his turban (Credit: Pius99/Getty Images)

We were nearing the end of the journey, and the train slowly descended to the sleepy, terracotta-roofed town of Hali Ela to terminate at the city of Badulla in the lower central hills.

As we pulled into the station, I realised that despite having travelled extensively around the world, I’ve often felt happiest during this slow journey through my own country. In many ways, as the train snakes past the century-old tea bushes, British stations and settlements of tea-estate communities, it quietly reveals the story of an island to those willing to put down their phones and look for it.