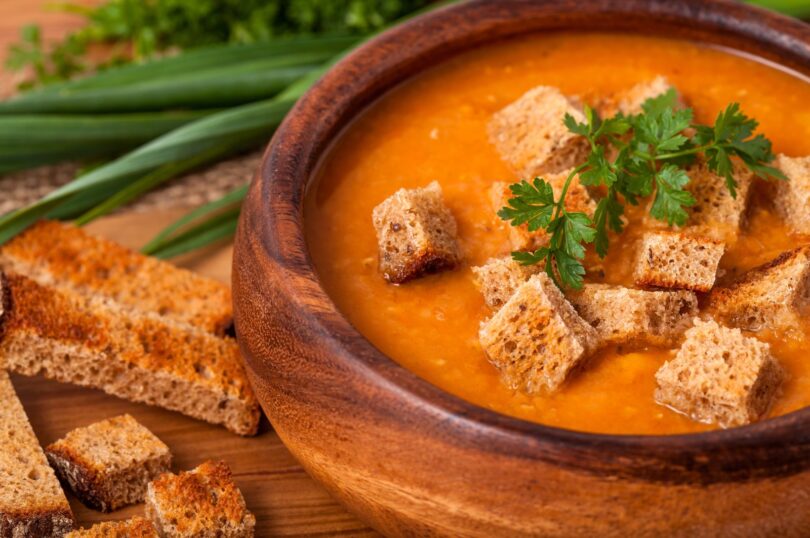 ISTANBUL: Like their impact around the world, soups have a significantly important place in Turkish cuisine as well, where they have garnered a special place for themselves and if you want to warm yourself with a hot soup as the days get colder, let me show you some wonderful Turkish recipes

Soup is of great importance in countries worldwide. It is economical, has a high nutritional value, is satisfying and at the same time is easy to cook. As such, soups have managed to find a place on our tables at every meal.

Soup is an essential part of every meal for Turks. It has been a dish made by everyone from commoners to the sultan’s palaces because it is nutritious and economical, apart from being a traditional food, and has become widespread among all classes.

Many regions of Anatolia have a wide variety of unique dishes and among them, soups always come first as they are one of the most important dishes in Turkish cuisine, which has a richness unlike any other thanks to its diversity of civilizations and climates.

Today, soup continues to be consumed for breakfast as well as dinner. As an easy-to-digest food, it can be served hot or cold, on a plate, in a bowl, or a glass, and is both delicious and nutritious. For this reason, there are hundreds of types of soups.

Compared to other cuisines, the place of soup is different in Turkish cuisine. Consumed as a main course and appetizer in Western countries, soups are a type of food that can be included in all three meals in our traditional cuisine culture and constitute the designated starter of Turkish cuisine.

Soup is essential in Anatolian culture and the history of Turks. The porridge-like foods that the nomads living in the Middle Ages and Central Asia often prepared and consumed have continued in the form of a soup tradition in Anatolia and were developed and enriched over time. As a result, it paved the way for the formation of soup types that have been consumed in the Ottoman period as well as today’s Türkiye.

Soup, which is often only consumed as an appetizer in the West, is referred to as a meal in Turkish culture and is described as the manager or representative of the table. Soup exists in the culture of almost all nations. It is usually the first dish on the menu, but some like the Chinese have soup at the end of the meal. In Turkish cuisine, soups are made with all kinds of food and every soup made in Anatolia is special in its way.

So, let’s take a look at three regional and delicious soup recipes together.

Lebanese is a kind of yogurt soup. It is found in Lebanese cuisine and Turkish cuisine. It is also called shepherd’s soup in Türkiye’s Mardin.

Two tablespoons of rice are placed in a pot and a glass of water is added to it and boiled until it softens. To prepare the meatballs, put the minced meat in a bowl with grated onion, salt and pepper and knead the mixture thoroughly. Then, the meatballs are shaped by rolling them into marble-sized balls. Add four or five glasses of water to the rice, add chickpeas and boil. Add yogurt, flour, lemon juice and about half a glass of water into a bowl and whisk. Use a ladle to scoop some water from the rice mixture boiling in the pot and add it to the yogurt mixture. Whisk thoroughly. This prepared yogurt dressing is added little by little to the chickpea-rice mixture cooking on the stove. Add salt and let it boil. In a large pan, melt the butter and fry the meatballs. Two teaspoons of mint are added to the fried meatballs and heated. The soup is transferred to a serving plate and the buttered mint meatballs are poured over it.

Antep Byran is a local dish with meat and rice. It has been registered with a Geographical Indication product label by the Turkish Patent Institute.

In a pot, boil the meat and bones over high heat. Reduced the heat and boil until well done. In another pot, cook the rice, and after 15 minutes, the boiled rice is placed in bowls in five portions. Ladle the meat and broth along with the garlic, pepper leaf and salt over the rice. Finish it off with a squeeze of lemon.

Cabbage soup is one of the local recipes of the Black Sea region. It is a very easy and healthy soup recipe to make.

After washing the cabbage, chop it finely and boil it in salted water for 15 minutes, drain it and set it aside. Put oil in a pan, add finely chopped onions and saute them. Add the diced carrots and potatoes and saute them for two or three minutes. Add the garlic and seasonings and mix. Then put the boiled and drained cabbage in the pot, mix it and fry it for a few more minutes. Make sure the stove is not on high heat. Then add bulgur, boiled corn or shell beans and mix. Add six cups of hot water, mix and cook on low heat for about 25 minutes. Mix the almost-cooked corn flour with half a glass of water in a bowl until it gets a smooth consistency, add it to the soup and cook for five more minutes. After it boils for a while, take it off the heat and serve.