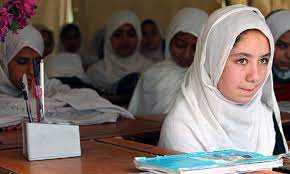 Education is a fundamental right of every citizen. If it is so, then who is responsible for the miserable condition of the female literacy rate in the whole Pashtun tribal areas especially in Waziristan? According to the constitution of the Islamic Republic of Pakistan, the government has to make sure that every citizen gets an opportunity to educate himself and contribute to the development of a society.
Here the question arises that, what proper measures are taken by government to ensure girls education in the mentioned area. Sadly said, that the government has failed not only to build quality educational institutions but also failed to provide an enabling environment where parents feel encouraged to send their daughters to school.

It is not the case that they do not want to go to school, but they are compelled by prevailing circumstances to bury their dreams. It was more than shocking when the female students of Waziristan finally broke all shackles in the shape of a protest for education, a fundamental human right. On the 8th of November, girls of GDC Wana recorded the first-ever protest by females in the history of Waziristan. Having different slogans in their hand they warned not only the government but also the locals, saying, “Education is our basic right and we will snatch it, if not given”.

It is, I believe, no exaggeration to say that Waziristan’s girls can secure top positions in almost all competitions across the country if given proper education. Advocating my claim, I would bring few examples. Miss Wazir, Additional Deputy Commissioner Nowshera, belongs to South Waziristan, is awarded the best officer award of 2022. Zarmina Wazir, hailing from South Waziristan, a brilliant daughter of Ayaz Wazir aced the CSS exam in 2017 with the top position among the candidates from FATA. Ayesha Mehsud, is a brilliant daughter of the soil and is a 21-grade officer working in the Judicial Academy of Pakistan. There are many other success stories about the brilliance of Waziristan’s girls.

This fact must not be denied that militancy had not only affected other areas of life but hugely affected the field of education in the Newly Merged Tribal Districts of erstwhile Fata. Many of the girls’ schools were demolished, and girls were banned from going to schools by militants a decade ago. They had no opportunity to realize their dreams like choosing a profession, choosing their life partner, and contributing to their families and then to society at large. Now enough time has passed and no result-giving steps have been by the government so far.

Erstwhile Fata’s merger with Khyber Pakhtunkhwa was an important step by the government of Pakistan to tackle the prevailing security issues, promote female education, and bring peace and prosperity to the region at large. The female literacy rate in ex-FATA is in the miserable condition about 7.8 percent. According to the FATA annual education census 2017, only 37 percent of girls were attending school at the primary level and 5 percent of girls at the secondary level, compared to 49 percent of boys at the primary level and 17 percent of boys at the secondary level. It was also reported that 14.7 percent of girls between ages 3 and 13 had never been enrolled in any school. People of the mentioned region had a lot of expectations after being merged with KPK. They believed that the government will take some speedy initiatives for the welfare of the people, especially for girls’ education. Contrary to their expectations, the government has turned deaf ears to the genuine issues, so rightly said that “expectation kills”.

Women’s rights movements in the shape of female journalists, Razia Mehsud, Marina Wazir, and many others have been working for girls’ education and demanding the government to promote female education and an end to conservative thinking/ behavior towards females. Although, awareness campaigns by societies, organizations, and media workers are launched, still the people opposing female education have a strong grip on their stance. Efforts are being made but are useless until opponents lose their influence in the area.

At the primary level, the ratio of male and female students is approximately the same but the female ratio decreases as they enter the middle level. This massive dropout of girls is quite alarming. Lack of middle and high schools, conservative thinking, and militancy are the basic reasons behind girls’ illiteracy. Parents do not consider girls’ education more important than that of boys. Although, poverty is the main hindrance to girls’ lack of education but parents are also not ready to invest in girls’ education. Girls are treated like guests for a few days because they have to leave the home after being married by the choice of their parents.

We have failed in providing education to the girls. We have darkened their future, ruined their future, and played with their expectations. Now both, the government and makes the dominants of society need to make collaborative efforts so that girls’ education is ensured and their dark future is saved. Substantial initiatives, huge investments, awareness campaigns, and seminars can surely bring fruitful results regarding girls’ education in tribal areas.