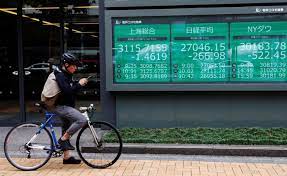 China will stop requiring inbound travellers to go into quarantine starting from Jan. 8, the National Health Commission said on Monday. It will also downgrade the seriousness of COVID-19 as it has become less virulent and will gradually evolve into a common respiratory infection. read more

Japan’s Nikkei share average (.N225) was up 0.3% by lunchtime, having given up some early gains that had taken the index to its highest in a week, helped by retailers’ hopes for a return of big-spending Chinese tourists, as Takashimaya (8233.T) boosted its profit outlook.

U.S. stock futures, the S&P 500 e-minis , inched up 0.6%, indicating the market is set to rise as traders return to their terminals on Tuesday after the Christmas holiday.

Markets in some regions including Hong Kong and Australia remain shut on Tuesday.

Chaoping Zhu, a global market strategist and JPMorgan Asset Management, said the latest policy move from China indicated economic activity in most major cities may return to normal very quickly, which is very positive for investors.

“Most Chinese cities could recover from the first wave of the latest COVID-19 outbreak by January… this would be faster than people have expected,” he said, adding there was concern of an outbreak lasting longer and weighing on the economy, but that developments generally have been better than expected.

He also said the reopening of China, which also entails resuming outbound visits for Chinese tourists, will lift consumer and service sectors outside of the country, particularly those in nearby Southeast Asia.

Inbound tourists had recovered 60% to 70% by November for many ASEAN countries, Zhu said, citing in-house research, but there is still a gap between now and 2019 before the pandemic.

“This gap will be filled by Chinese tourists. This is the last piece of the puzzle,” he said.

As a result the dollar moved broadly lower on Tuesday, as currencies from most emerging Asian countries strengthened, as risk appetite grew after China scrapped its quarantine rule.

The South Korean won gained the most, rising about 0.7% to hit its highest since June 10.

Oil prices ticked up on thin trade on Tuesday, on concerns that winter storms across the United States were affecting logistics and production of petroleum products and shale oil. read more

U.S. Treasuries will resume trading on Friday. The benchmark 10-year yield climbed the most last week since early April, ending around 3.75%.

The latest Personal Consumption Expenditures (PCE) price index, released on Friday showed inflationary pressure is easing, but Federal Reserve policymakers remain concerned by the strength of the labour market and the stickiness of service sector and wage inflation, which could complicate the central bank’s efforts. read more

Analysts from Citi flagged upside risk in a report on Friday that the Fed’s policy interest rate could reach 5.25% to 5.50% by the end of 2023, largely based on expectations of the labour market continuing to add jobs in the first months of 2023 despite already being very tight, putting further upward pressure on wages and non-shelter service prices.