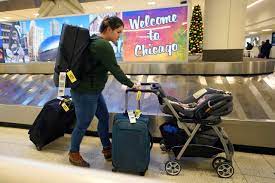 WASHINGTON (AP): Concerns about illness or inflation aren’t stopping Americans from hitting the roads and airports this holiday season. But a massive winter storm might.

Forecasters predict an onslaught of heavy snow, ice, flooding and even tornadoes from Thursday to Saturday in a broad swath of the country, from the Plains and Midwest to the East Coast. A surge of Arctic air will follow. The Christmas weekend could be the coldest in decades.

An early sign of trouble came Tuesday in Seattle, where a winter storm caused at least 192 flight cancellations, according to the FlightAware tracking service. Greyhound also canceled bus service between Seattle and Spokane.

Airlines offered travelers the option of choosing new flights to avoid the bad weather. Delta, American, United and Southwest waived change fees at airports that might be affected.

The Transportation Safety Administration expected Dec. 22 and Dec. 30 to be the busiest days at U.S. airports, with traffic expected to be close to pre-pandemic levels.

Airports said they would work hard to stay open. Chicago’s O’Hare and Midway airports said they have 350 pieces of equipment and 400,000 gallons of pavement de-icing fluid between them to keep runways and taxiways clear.

The weather added uncertainty to what was expected to be a busy travel season. Earlier this month, AAA estimated that nearly 113 million people would travel 50 miles from home or more between Dec. 23 and Jan. 2. That’s 4% higher than last year, although still short of the record 119 million in 2019.

Most planned to travel by car. About 6% will travel by air, AAA said. Either way, many travelers could find themselves hastily changing their itineraries.

Joel Lustre originally planned to drive from Bloomington, Indiana, to McGregor, Iowa, on Thursday. But he shifted his work schedule, and his wife cancelled an appointment so they could leave Wednesday and beat the storm.

Kurt Ebenhoch, a consumer travel advocate and former airline executive, said the fee waivers for inclement weather that airlines began offering about 20 years ago give consumers valuable time ahead of a storm to figure out alternate days and routes.

But consumers need to read the fine print carefully. Delta, for example, is currently waiving any difference in fares for rebooked travel that happens before Dec. 25 for flights out of the Pacific Northwest. But if the flights are rebooked to a date after Dec. 25, passengers may have to pay the fare difference.

The urge to travel and visit family and friends over the holidays appeared to outweigh concerns about illness. The Centers for Disease Control and Prevention said coronavirus cases and deaths have increased in recent weeks, and the trio of COVID-19, seasonal flu and respiratory syncytial virus (RSV) continues to stress the health care system.

William Karr was traveling Monday from Los Angeles to Minneapolis, where he planned to meet up with his sister and then drive to Iowa. Karr said he would wear a mask on the flight to avoid getting sick over the holidays, but he has taken other flights unmasked.

“I think the precautions sort of go out the window at a certain point, and people are willing to catch COVID if it means they’ll be home with their families,” Karr said.

Inflation also didn’t seem to be cutting into holiday travel demand. The average round-trip airfare rose 22% to $397 in the second quarter of this year — the most recent period available — according to U.S. government data. That was higher than overall U.S. price inflation, which peaked at 9% in June.

Stacie Seal, who was flying Monday from Los Angeles to her home in Boise, Idaho, said her family had opted to visit Disneyland using two free companion tickets, which are earned through airline credit cards.

“If I had to buy the tickets without a companion fare, I’d probably pause and think about the price now,” she said.

Lindsey Roeschke, a travel and hospitality analyst with Morning Consult, a market research company, said travelers appear to be cutting back in other ways.

In a recent survey, Morning Consult found that 28% of U.S. travelers were planning a one-day trip for the holidays, up from 14% last year. There was also an uptick in the number of people planning to stay with friends or family instead of at hotels. Roeschke thinks higher prices were a factor.

“Inflation is still playing a role,” Roeschke said. “It’s not keeping people from traveling, but it’s maybe shifting the way they actually travel.”