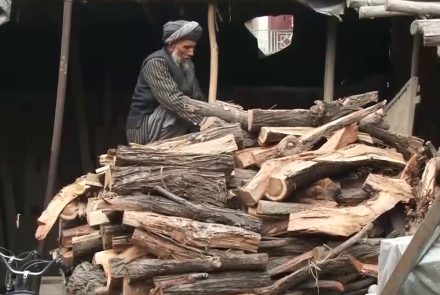 FARYAB (ToloNews): A number of Faryab residents on Friday expressed their concerns over the rise in firewood and coal prices and said they cannot afford to buy the materials for heating their homes in the cold winter.
They called on the officials to control the prices in the markets.
Zinatullah, a baker in the province, said the rising prices of firewood and coal have affected his business.
“It was initially good and the prices were low but now the prices of flour and heating materials, including firewood, coal and gas have increased,” he said.
“The price of firewood is 80 Afs for every seven kilograms,” said Mohibullah, a resident of Kabul.
Wood and coal sellers said there is a sharp reduction in the number of customers. “There is no customer because people cannot afford it. There are the families who don’t have money to buy firewood,” said Mohammad Hassan, a seller. “No one has the capacity to purchase anything. Children are even collecting trash from the streets to burn it for heating,” said Nematullah, a resident of Faryab.
Local officials said the prices of firewood and coal have not surged but unemployment and poverty led to the lack of people’s ability to buy firewood.
“There has not been any special change. The price for seven kilograms of firewood was 70 to 100 Afs provisory and it is the same now. Only the ability to afford it has dropped,” a local official said.
Seven kilograms of firewood is sold for 100 to 110 Afs in local markets in Faryab while the price for seven kilograms of coal is 120 Afs in the province.