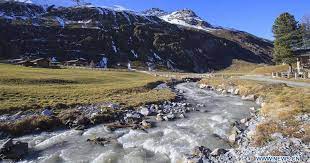 MeteoSwiss, Switzerland’s national weather and climate service, said January heat records fell at several monitoring stations on the north side of the Alps mountain range, due to warm winds from the southwest.

“For the first time, 20 C in January on the north side of the Alps!” it tweeted.

The 20.2 C temperature recorded in Delemont was due to mild southwesterly winds combining with the Foehn effect — a dry, warm, downslope wind on the downwind side of a mountain range — coming off the Jura mountains, said the agency.

Temperatures in Delemont were hovering more than 16 degrees above the 1991-2020 average for the turn of the year, giving weather “worthy of June”, it added.

Delemont is the capital of the northwestern Jura region, which borders France.

In Vevey on Lake Geneva, people queued for ice creams, while in Geneva itself, swimmers took part in the traditional New Year’s Day dip in the lake.

They toasted the arrival of 2023 with fancy dress and champagne — and in unseasonally warm air well above the 8.5 C water temperature.

Switzerland’s previous January temperature record for north of the Alps stood at 19.4 C, recorded on January 12, 1993 at Lucerne.

The highest January temperature ever recorded anywhere in Switzerland was 24.0 C, registered on the south side of the Alps in the Ticino region, in 1944 at Lugano and in 2007 at Locarno-Monti.

In the tiny principality of Liechtenstein neighbouring Switzerland — also covered by MeteoSwiss — temperatures reached 20.0 C in the capital Vaduz on Sunday.