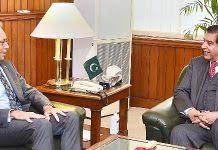 Talking to Ambassador of Belgium Charles Delogne at Parliament House, he said that Pakistan has been facing severe impacts of global climate change as there has been severe destruction of properties and loss of lives of common people.

Speaker said that enhancing parliamentary interactions and economic cooperation is vital for the prosperity of people and their well-being.

He said that the official visit of the 7 members Belgium’s Parliamentary delegation in Pakistan from 16th to 20th January 2023 would enhance parliamentary cooperation between both nations.

He also said that the Pakistani economy is agriculture-based and flash floods have destroyed the agriculture sector.
The Speaker appreciated the support of the Belgium people and government for being 1st country to support Pakistan in flood rehabilitation initiatives.

The Speaker stressed on the need to further develop contact between the business communities of both countries to tap the massive economic potential in Pakistan.

He said, “Pakistan attaches great importance to its relations with Belgium as these relations are based on close people-to-people contacts,”Convener Pakistan-Belgium Parliamentary Friendship Group MNA Ms. Asia Azeem was also present in the meeting.

The Ambassador of Belgium in Pakistan appreciated Speaker of National Assembly Raja Pervez Ashraf for his warm welcome. He appreciated the comprehensive schedule of seven members Belgium’s Parliamentary Delegation to Pakistan.

He said that both Belgium and Pakistan share the same cultural and language diversity. He also said that Belgium was the first country to support Pakistan, especially in flood relief efforts. (APP)