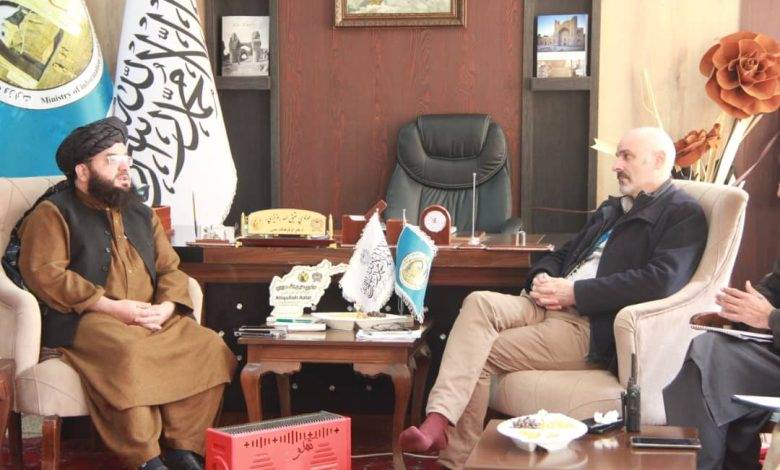 KABUL (Khaama Press): Mawlavi Atiqullah Azizi, Deputy Minister of Culture and Information of Afghanistan met with Brendan Cassar, UNESCO Culture Program Officer to discuss the restoration of historical sites.
During the meeting, Mr. Azizi shared his concerns with Brendan about restoring historical sites and ancient reservoirs in some provinces of the country, which are on the verge of collapse.
The deputy minister said that Ghor Jam Minar, Mirwais Nika, and Ahmad Shah Baba shrines in Kandahar, the walls of Bost Fort in Helmand, and some historical buildings and academic centers in Ghazni and Bamyan provinces are being protected. He added that UNESCO’s urgent assistance in constructing and restoring certain historical places is required now more than ever before as the country is faced with a massive economic crisis amidst other significant challenges.
For his part, Brendan deemed it necessary to carry out these works and said that UNESCO is ready to assist in restoring the historical sites in Afghanistan.
This comes as the Taliban blew up the giant statue of Bamyan, also known as the “Buddhas of Bamyan” during their previous spell in 2001. The act drew widespread condemnation from the international community, describing it as a complete cultural tragedy and disrespectful against global Buddhism.
Following the Taliban’s return to power in August 2021, they are accused of disrespecting cultural values in the war-torn country. The de facto authorities have renamed universities and educational institutions, venues, airports, hospitals, and cities throughout the country– arousing the anger of the general public.
Meanwhile, the caretaker regime is also accused of implementing an anti-Farsi/Dari policy in the country as they have already erased Farsi from the billboards of certain government institutions.
The ruling regime’s emphasis is on using Islamic terms instead of the individual’s names or modern terminologies while naming educational institutions, schools, avenues, and more.