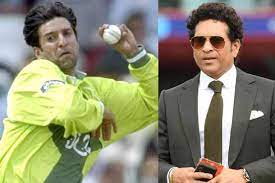 The Indian cricket great said in his publication that cricket was a team game but truly it s a war between bat and ball. Wasim Akram used to be the biggest challenge for the opposite team’s batters, he said.

“Batters learn and polish their skills while facing a bowler of such calibre and this experience always stays with you,” he said. He said Akram was a master and could make the ball talk. “His run-up was natural unlike other bowlers. He was never bound to count his steps,” Tendulkar added.

“Wasim Akram used to do effective bowling with any start; when I faced him for the first time, it was a completely new and unique experience. I remember every match played against him,” he said.