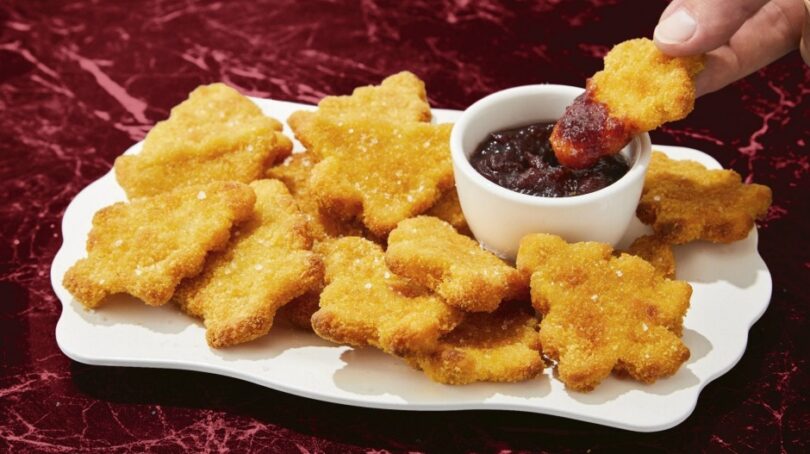 It’s the most wonderful time of the year again, folks. Time for supermarkets to unleash the good, the bad and “who in the name of Jesus, Mary, Joseph and the donkey signed off on this?”

Woolies banished the knotty snags to the Island of Misfit Finger Foods this year (joining Coles curry puff candy canes, thank god) but there are still plenty of seasonal snacks in supermarkets to rank and potentially recommend.

I’ve listed all the ones I could get my hands on below, in order from “nope” to “not bad when you’re in the zone to eat a box of lobster puffs and watch a National Lampoon’s” to “you might even consider serving these to people you like”. Every now and then I think, “Gee, vegetarians are missing out. No juicy rib-eyes escorted by a smorgasbord of mustards, and no prawn rolls after the beach. A vegetarian will never know the joy of leftover ham and a honking big glass of sparkling red on Boxing Day.” But then I’m confronted with something like these watery Chinese-farmed scallops wrapped in Hungry Jacks-level bacon and I wonder if the vegos are onto something after all.

Coles is all about keeping prices Down Down, but some of its festive seafood quality needs to go Up Up. The retail giant usually does a decent job stocking locally caught and farmed fish, so it’s disappointing to find these cutlet-y things use Vietnamese vannamei prawns which I can only describe as tepid mush. The crumbed coating is also so greasy I wonder if it might work through the paper towel and turn the kitchen bench see-through.

I find food shaped like Santa hat as thrilling as the next person, but this wax-wrapped block is best left on the shelf – or better yet, the tarmac at Heathrow. Axolotls have a stronger bite. Australia already has hundreds of incredible cheddars (anything from Tasmania is usually a winner) you can whack on the cheeseboard instead.

Product of the United Kingdom. Available at Coles.

This and the Santa hat are in the family of club cheddars, those (usually) wax-covered board-fillers made by milling different cheeses together for mealy texture and Play-Doh-style pliability. This one looks like a cartoon pudding and it ranks marginally higher because the holly leaf can be used to decorate something nicer, such as a carton of custard on the turn.

Product of Scotland. Available at Coles. Warning: final product may not resemble image on box. Firstly, there’s no lettuce (not to mention sliced cheese, pickles and tomato) to assemble sliders you wouldn’t be mortified to send around the backyard. Secondly, the patties look thick and juicy in their styled photo. I cooked mine as per the packet instructions (pan-fry on medium to high heat) and they shrivelled to a size not much bigger than a communion wafer.

What makes these “Christmas” sliders may be beyond speculation, but it could have something to do with the patty mix of beef and pork, and that the accompanying herbed tomato sauce tastes more like something from Leggo’s than anything you would want to squirt on a bun.

Objectively, these are not good nuggets. Each one contains 39 per cent turkey breast and 9 per cent chicken, with flour and water making up most of the remaining ingredients.

They’re made to be cooked from frozen and have a coarse texture like the cut-price chook products of my childhood. This means I also dig them more than any person of sound mind should.

Growing up, there was no better meal than the one time a month I was allowed to order lunch from the school canteen. A white paper bag ripped open to reveal six steaming hot nuggets, and tomato sauce be damned: the MSG in the pale coating was flavour enough. These are exactly those nuggets, now in chubby Christmas tree form. Almost identical to the Ingham’s nugs – including the ratio of turkey to anaemic crumb – except that they’re “not suitable for freezing”. Cooking from a thawed state makes little difference to the end result, however, and these only rank slightly higher for the slightly lower price.

I’m shocked. These turkey balls filled with a bourbon-spiked currant mix are made in Australia and not an American factory also churning out pumpkin-spiced hot dogs and other such silliness. I wanted to enjoy these, I really did, but there’s a third less turkey than Steggles’ balls below, and the filling tastes like fruit mince on a three-day bender.

It’s fine. A bit rubbery, and I can’t pick much that could be described as “Danish blue cheese”, but nobody’s walking out the door if you serve this salami on your second-best platter with a few olives and Cheezels. They may rightfully scoff the Cheezels first though.

Serve these as “curried potato and pea croquettes” and I genuinely doubt guests will know they’re eating a hors d’oeuvre that’s one-third Vietnamese basa fish. Lightly spiced with turmeric, fenugreek and garlic powder, these aren’t at all bad with a squeeze of lemon. I say Coles should ditch the imported basa and spruik ’em to vegans instead.

Umm, I don’t know … have you eaten a bag of pretzels before? This mix of pretzels is that. It does exactly what is says on the plastic tray with some Ritz-adjacent crackers thrown in because it’s time to party.

They’re putting gravy on the inside now? Someone notify the Nobel Prize committee, humankind has peaked. Anyway, these are just OK.

Unnaturally springy and in need of more seasoning, but after a spangling with sea salt, and a few negronis, I can almost guarantee no one will care.

The gravy goes alright too, even though each ball erupts in the oven like the lanced boil on an orc. I come from the school that believes “in blankets” should only apply to something, ideally a sausage, swaddled in bacon. These are spring rolls. Regardless, they happen to be quite tasty, which has zilch to do with the farmed vannamei prawns (there they are again) and everything to do with flavour-boosting garlic, soy sauce and black pepper.

This vegan wreath is shaped like a dunny lid. Also, I don’t hate it.

Slice the soy and pecan-loaded ring into snackable segments, and you’ve got a plant-based buffet of passive-aggressive sausage rolls. Woolies suggests serving these greasy wheels as a side dish or canape, but I reckon they’re a bit too bloody big for the latter. Imagine going in for cheese, dip and crackers after a rissole of cranberry-sweetened pork stuffing wrapped in streaky bacon. No thanks. But does anyone want to go halves? Seasoning, fat and spice are agreeably balanced and the bacon crisps nicely in the oven. Straight up, these look awful. Puff pastry weeping cream the colour of an airline curry. Incredibly, however, not bad! I’ve eaten an eight-pack in front of the telly over the past fortnight, and although there isn’t much lobster in the mix, for a lightly herbed cream-cheese pastry you can do much worse. (Borg’s Pastizzi, you’re still number one.)

In the supermarket-pork-sausages-wrapped-in-supermarket-bacon stakes, these are as good as it gets. Inoffensive fun for the whole family, and little of the cheap and fatty mouthfeel I was expecting. (Note that you’ll still want mustard on the side to keep things interesting). Also consider teaming the tiny snags with scrambled eggs for holiday breakfasts.

Winner, winner, moulded pork ball dinner. I would eat all eight of these golden orbs in one sitting if no one else was home to judge. There’s nothing stupid or too fancy going on, just a restrained use of honey to balance an apple sauce filling against pleasantly salty pork. The meat doesn’t have the bouncy processed texture common to other balls in this price range either. Certainly worth turning the oven on for.