Sailing towards the North Aegean island of Ikaria around dusk, its craggy peaks rising steeply from the narrow strip of rocky shore, I noticed the twinkles of lights from houses were not primarily along the coast, as is the case with most Greek islands, but were predominantly scattered in the mountains behind. I wondered: why would inhabitants make life tougher for themselves by choosing to live up on the precipitous slopes, far from the more level ground near the sea?

I soon found out that the sea was both Ikaria’s blessing and curse. It allowed the island to spread its reputation for its excellent – and potent – Pramnian wine, and trade its prized product across ancient Greece, along with olives and honey. But the sea also brought pirates, lured by the island’s highly regarded produce and the prosperity it brought.

Ikaria was not unique within Greece in being beleaguered by pirates, but it suffered the additional complication of a revolving door of rulers. The Persian Empire, the Delian League association of Greek city states, the Romans, the Byzantine Empire, the Republic of Genoa and the Knights of St John all exercised varying degrees of influence over Ikaria between 500 BCE and 1521 CE, at which point Ikaria fell firmly into the Ottoman Empire, where it would remain for more than three centuries. 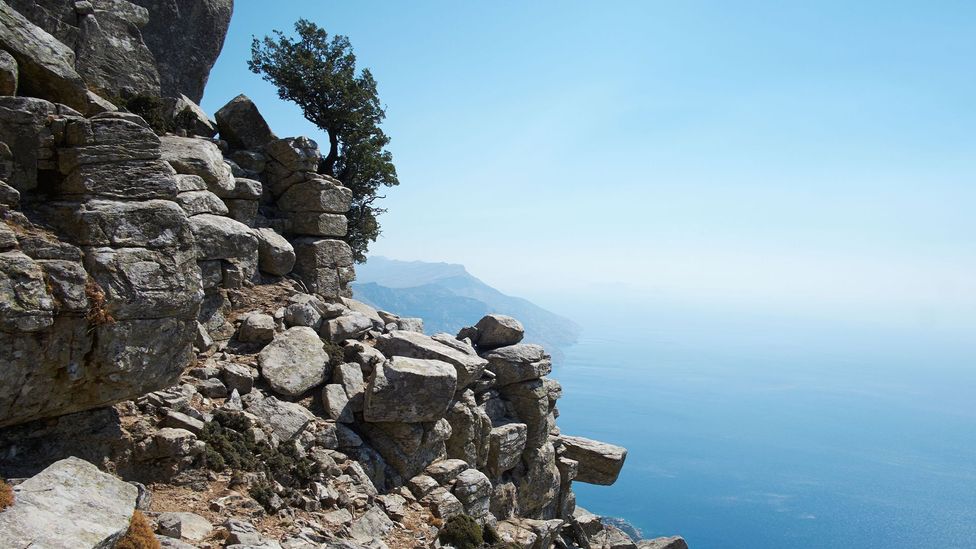 Historically, Ikarians have retreated into the mountains to escape threats from the sea (Credit: Percy Ryall/Alamy)

But due to its geography, the island was always an outpost of whichever territory it was within, and regular periods of instability, along with inadequately policed coastlines, allowed piracy to flourish.

While piracy was first reported on Ikaria in the 1st Century BCE, it became a more-or-less unchecked threat during Roman rule (late 3rd Century BCE to 5th Century CE) and Byzantine rule (5th to 12th Centuries CE). Then, after the arrival of the Genoese in the 14th Century, Ikarians resorted to destroying their own ports to deter invaders. Even this act was not enough.

Lacking resources to repel their aggressors, islanders decided to call their bluff. They withdrew deep into their mountainous interior, going to every possible length to convince anyone sailing past that Ikaria was deserted by building communities that were ostensibly invisible – at least, in the days before electricity. It was this elaborate and audacious disappearing act, pulled off by islanders for several centuries, that I’d come to learn more about.

I met Eleni Mazari in her office in the north coast port of Evdilos. Mazari runs a real estate business, but the wall inside the entranceway indicated her other long-standing passion: Ikaria history. Here, shelves were lined with models of the types of homes the retreating islanders decided to build, commonly known as “anti-pirate houses”. 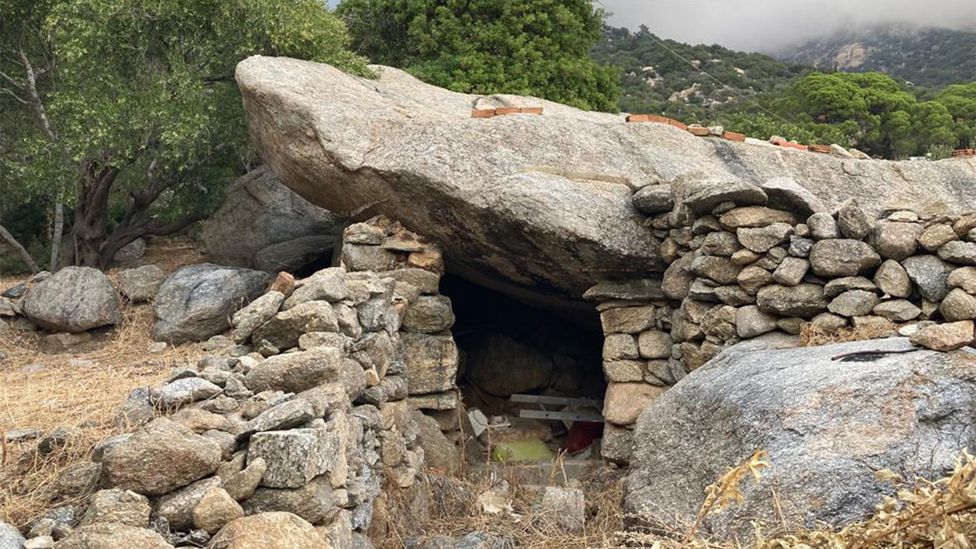 These squat, stone-built dwellings incorporated natural features of the landscape, such as rocks, cliff overhangs and thickets. Boulders, which were strewn over the high mountain slopes, often formed much of the walls and ceiling, while dry-stone walls made up the other walls. Living arrangements were simple – houses had little more than a door and a hearth, as islanders would spend the majority of their time outdoors.

“It was a total reversal of the sort of structure most people associate with Greece,” said Mazari, who has been fascinated by anti-pirate houses for years, photographing them and collecting all available literature on them. “The age of grand temples was over. Ikarians were building homes designed to be seen by no-one, and to do it they had to go high up into the wilderness where they could not be observed from sea. There would have been many occasions from Roman times onward when they would have temporarily hidden in the mountains from invaders, so the possibility of doing so was always in their minds, if it were needed.”

It was the incorporation of Ikaria into the Ottoman Empire that persuaded Ikarians to completely decamp from the coast to the crags. The Ottomans proceeded to rule Ikaria laxly, allowing buccaneering to run rife as a means of disrupting and discouraging sea trade from other states. The choices facing Ikarians under such threat were limited: fight, with scant means at their disposal, to their probable deaths; vacate the island for safer shores; or seek sanctuary in the safety of the mountains.

This time, however, it would be a long-term move. Islanders would conceal their society in the rocky upper reaches of Ikaria’s Aetheras range for the next 300 years. This period was dubbed the “piratiki epochi” (pirate era), with the early years tellingly known as the “century of obscurity”. 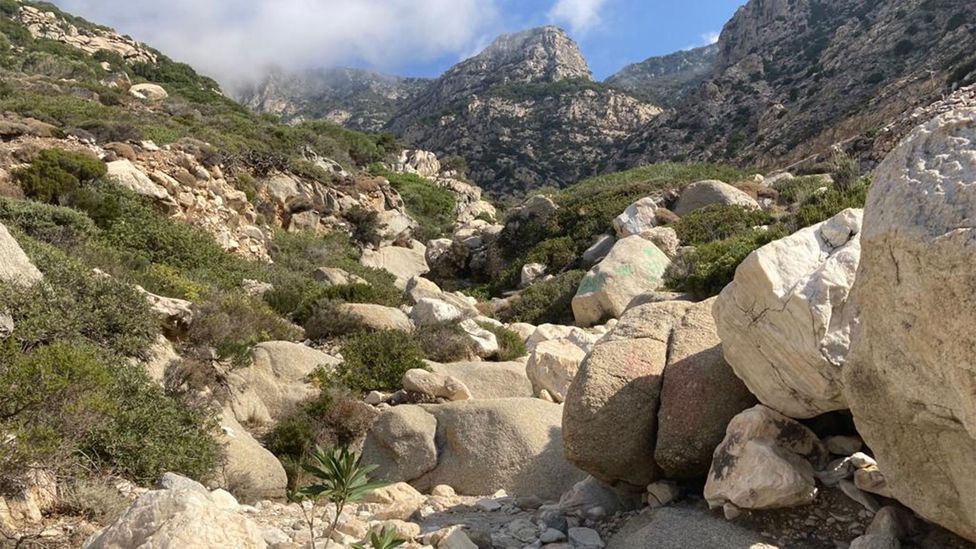 Even today, it is hard to move from Ikaria’s coast up to its craggy interior (Credit: Luke Waterson)

“It was a self-sustained society, down to the courthouse, the narrow terraces on which they grew wine, olives, reared goats, made honey,” explained Mazari. “Ikarians have always been used to creating something out of not very much. So, what to outsiders might seem like uninhabitable mountain land was not so to our ancestors. If people’s homes stayed invisible to pirates, it was worth resettling.”

As I drove along the island’s north coast and looked up into what is affectionately known as Ikaria’s “wild west”, it seemed to me that the craggy island interior would be hard to inhabit even today. The terrain was arid, rocky and virtually deserted; mountainsides plummeted so sharply into the sea there was scarcely enough level ground to carve out a plot for a house or for a road to twist along its edge.

My destination was Lagkada, the place to which many Ikarians decided to retreat. This upland refuge holds a sacred spot in islanders’ hearts: without it, the population would likely have died out. The track to get there was too steep and rough for me to attempt driving, so I walked up a route that wound hair-raisingly around the rockface into a lush valley you never could have seen from below.

Here, still without any sign to indicate it, and further concealed behind olive groves and surreally shaped boulders, was the cradle of Ikaria’s anti-pirate civilisation. 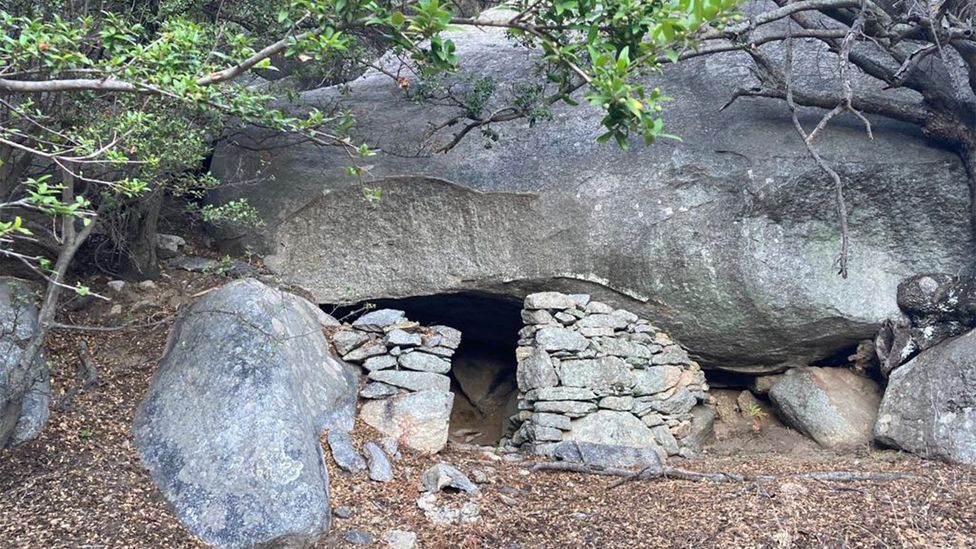 Today, Lagkada is something of a ghost village of stone dwellings (Credit: Luke Waterson)

Despite knowing there were numerous anti-pirate houses in the vicinity, I wandered up and down the valley for several hours and found none. It was only on a final scan of the valley from above that I caught sight of an aperture in a rock too angular to be naturally occurring. I had found the community’s old jail.

The effort I’d expended (there’s no information boards or options for a guided tour) made me appreciate how adept islanders were at constructing dwellings that completely merge into the landscape. Life must have been tough for them, constantly under the threat of pirate attack and knowing that camouflaging into this harsh landscape was their sole defence.

My next stop was further inland to the Afianes family winery. Besides being producers of some of Ikaria’s finest wine, owner Nikos and his daughter Eftychia are well-regarded experts on the island’s history. And they had agreed to show me the anti-pirate house on their property.

“On Ikaria we have no shortage of boulders,” smiled Eftychia, explaining that boulders determined the location and aspect of most anti-pirate houses. “The boulder formed as much of the house structure as its shape allowed, one or two walls and maybe, if the boulder had an overhang, the roof. If the land was too steep to make a flat plot, as it usually was, people would labour to dig the rocks out of the earth to create level terraces.” 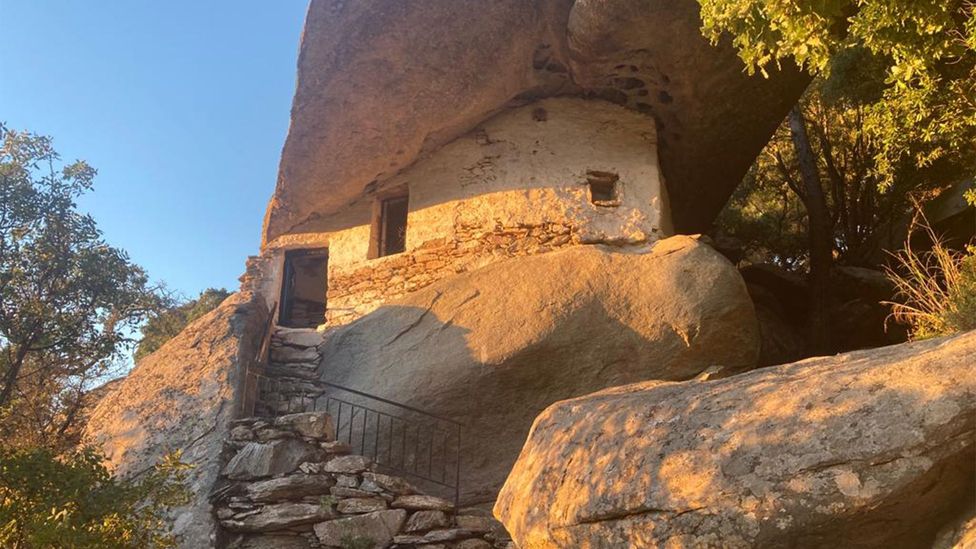 She added that traditionally, you would always build back from the boulder on the landward side, so the structure could not be seen from the sea. “And because suitable boulders are naturally widely dispersed, so the communities became [too], which meant there was less chance of everyone being discovered if pirates did invade,” she said.

We stepped inside their anti-pirate house, now used for storing wine. The thick walls, Nikos explained, would have ensured it stayed cool during hot summers and retained heat in winter.

Locals went to additional efforts to make their settlements invisible to outsiders. “The structure would be low, one storey only, and lower than the maximum height of the boulder,” said Eftychia. In addition, houses were built without chimneys to avoid giveaway columns of smoke. Instead, one stone on each side of the mortar-less walls would be removed while the hearth was in use, allowing smoke to subtly dissipate. People would only interact at night. According to Mazari, in the pirate era, they would rarely even keep dogs for fear the sound would alert invaders.

Anti-pirate houses may have been erected as emergency retreats, but they had a lasting effect on Ikarian society, long after warships dispatched by the US, Britain, France and Russia finally brought privateering in the Aegean to an end during the 1820s. The tendencies for villages to remain mountain-based and scattered, and for islanders to enjoy staying up late into the night, are both attributed to the pirate era. Even places of worship built in anti-pirate style survive, such as Theoskepasti Chapel thaat dramatically squeezes into a boulder overhang near Evdilos. 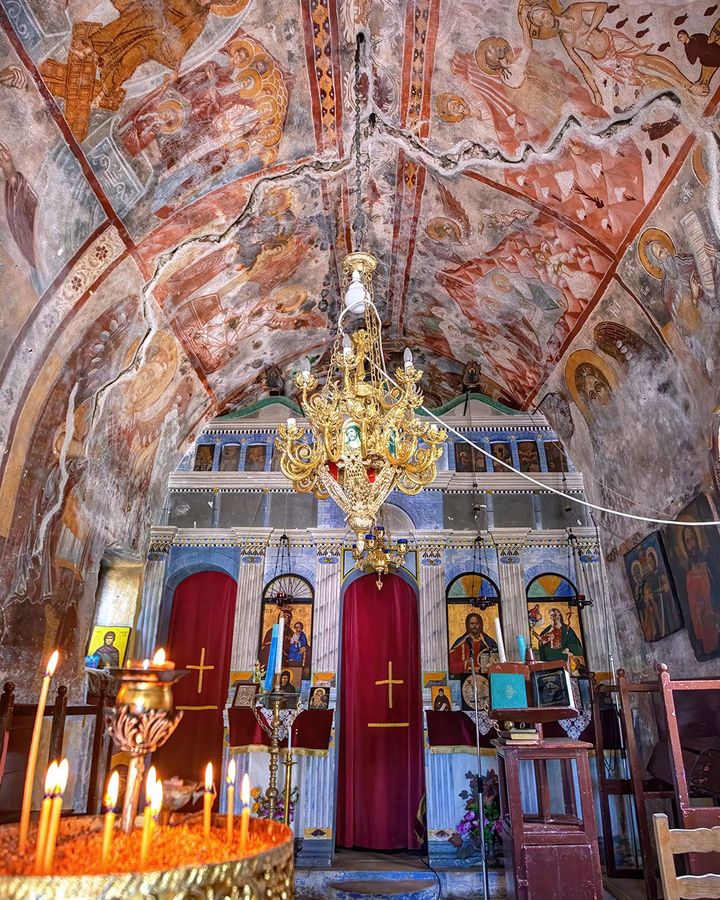 Despite being inside a rock, the interior of the Theoskepasti Chapel is quite ornate (Credit: Leoman/Getty Images)

As for Lagkada, while it seemed to be that the one-time centre of pirate era life is now abandoned, that’s not quite true.

“There is still at least one man living there permanently,” Nikos said. “His family never moved away. Most of us see him only when we go to Lagkada’s panigýri [festival], which he organises. The rest of the year, he must be surrounded by ghosts.”