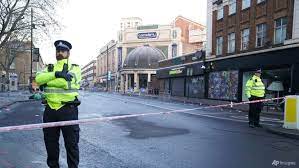 LONDON (AFP): Three people were in critical condition in hospital on Friday after a crush outside a south London venue hosting a concert by Nigerian Afrobeats singer Asake, UK police said.

Emergency teams were called to the O2 Academy in Brixton on Thursday evening following reports that “a large number of people were attempting to force entry to the venue,” the Metropolitan Police said.

Officers provided first aid and CPR to members of the public “in order to save life,” Chief Superintendent Colin Wingrove told reporters in an update from outside the venue.

Eight people were taken to hospital by ambulance while two “less seriously injured” were treated at the scene.

Four of those admitted to hospital were initially in critical conditions but that number was reduced to three by Friday lunchtime.

In an evening update, police said those three, aged 21, 23 and 33, remained in critical condition.

“This is still a fast-moving and evolving picture and we’re working to establish the events that led up to last night’s incident,” Wingrove said.

An “urgent investigation” was under way led by specialist crime detectives and cordons remained outside the site as officers surveyed the scene, he added.

The “serious incident” occurred during the last of three sold-out performances at the nearly century-old venue by singer-songwriter Asake.

The gig was canceled midway through his performance.

Video clips posted on social media and featured on newspaper websites appeared to show packed crowds pushing up against the doors of the 02 Academy, as well as violent scuffles in the foyer.

The footage showed irate attendees inside being told that up to 3,000 people had tried to break through the doors, with some succeeding, and that police had ordered the show to stop.

It was unclear who was involved in some of the clashes.

However, Wingrove confirmed that the Met’s Directorate of Professional Standards, a policing watchdog, was reviewing an officer’s conduct at the scene.

That followed footage appearing to show a policeman shoving someone down several stairs outside the venue.

Police later said that matter had been assessed by the Directorate of Professional Standards and “there is no evidence of misconduct” by the police officer.

The police added that one woman at the concert was arrested after assaulting an officer.

The Met appealed for witnesses to come forward, noting it was creating an online portal on its website for the thousands of people there to upload testimony and evidence.

“We’re also aware of a vast amount of footage being shared on social media,” Wingrove said.

“And of course this will be examined as part of the investigation along with body-worn video that officers have.”

Asake wrote on Instagram that he did not yet have “the full brief from the venue management themselves as to what led to the disruption.

“But we are thankful that all was peaceful at the end,” he added, apologizing to attendees that the concert was cut short.

The performer said his heart was “with those who were injured last night and caused any form of discomfort,” and that he was “in the process of reaching out” to those individuals.

The O2 Academy could not be immediately reached for comment.

London Mayor Sadiq Khan said his thoughts were “with all those affected by the awful incident” and that he was in close contact with the Met.

“I’m heartbroken that this could happen to young Londoners enjoying a night out in our city,” he added.

“I won’t rest until we have the answers their loved ones and the local community need and deserve.”