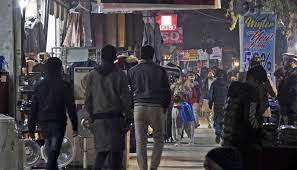 ISLAMABAD (Agencies): After the Pakistan Democratic Movement (PDM)-led coalition government announced to shut all malls and markets by 8:30pm in new energy conservation, the trading community Tuesday rejected the decision and sought its revocation. All-Pakistan Anjuman Tajiran (APAT) President Ajmal Baloch, in a statement, asserted that the shops will not close before 10pm, while restaurants will remain open till 11pm.
Following consultations with the traders, restaurant, and hall owners, the government — under its National Energy Conservation Plan initially unveiled on December 20 — has decided to enforce the closure of markets by 8:30pm and wedding halls at 10pm. In response, the business community lamented that despite strong protests and assurance from the authorities, the government decided to impose its “unilateral” decision.
Terming the government’s strategy for saving energy by halting the economic growth “counter effective”, Ajmal suggested that government officials stop using air conditioners and heaters in offices while protocols and allowances are given to bureaucrats and rulers should be stopped. He noted that the business community purchases the most expensive electricity, and therefore, favourable strategies should be devised for them.
The trader further suggested that street lights should be lit after 10pm, excessive use of electricity on national highways and motorways should be reduced and electricity in parks and government offices should be turned off after sunset. Karachi Electronics Dealers Association President Muhammad Rizwan Irfan President revealed that the Government of Sindh consulted the traders, restaurant owners, and wedding hall owners regarding the energy-saving plan.
He said during the consultation meetings, all stakeholders agreed that markets and malls should remain open till 9-10pm while restaurants and wedding halls should be allowed to remain open till 11-12pm. “However, despite their [Sindh government’s] assurance they imposed a unilateral decision,” Irfan lamented, asking the government to bear their expenses after the imposition of its energy conservation plan.
All Pakistan Restaurant Association Chairman Ather Chawla has strongly condemned the energy plan presented by the federal government, saying that the industry is still reeling from the damage done during COVID-19 pandemic. He slammed the Centre for imposing restrictions on restaurants, markets and wedding halls, saying: “Whenever the country faces an emergency — be it COVID-19 or any other crisis — the business community bears the brunt.”
“Are we the only ones whom you can target?” he asked the incumbent government as he sought the revocation of the decision. Chawla said millions of people’s income is associated with the restaurant industry while investment worth billions of rupees is at stake. He urged the government to reconsider its decision and allow restaurants to remain open till midnight.
Meanwhile, economists back governments’ measures for energy conservation, calling them the need of the hour. Sustainable Development Policy Institute Executive Director Dr Abid Qaiyum Suleri said: “Energy conservation measures announced today were most needed to save our scarce forex reserves in the short run and reduce our carbon footprints in the medium to long term. He said every dollar saved is worth a dollar earned, urging the traders and business community to support the government’s plan wholeheartedly.