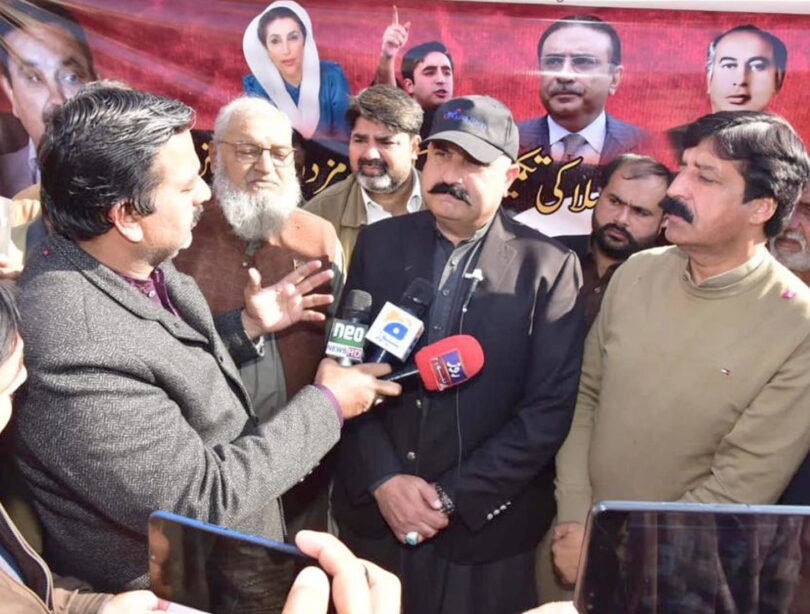 The Minister was accompanied by Minister of State Sardar Salim Haider. The inaugural ceremony was attended by representatives of labour unions, local political activists, dignitaries and a large number of workers. Workers of Pakistan People’s Party, Rawalpindi district enthusiastically participated in the event and shouted slogans of Jaye Bhutto.

Addressing the ceremony, Sajid Hussain Turi said these moments were very contented, ecstatic and eminent for him to handover more than 500 flats to hard work class of our society. He said today the government is fulfilling a promise to provide houses for every labour. He said Pakistan People Party and the Labour and Worker class of the society have cordial relations as protecting Labours rights is part of its manifesto. “To facilitate the workers to their doorsteps is the ideology of Shaheed Zulfiqar Ali Bhutto and Shaheed Benazir Bhutto and under visionary leadership of Bilawal Bhutto Zardari, we are following this ideology”, Turi said.

Sajid Husain Turi said that PPP never forget the martyrs of the nation so 70 residential flats are allotted to the martyred workers families who sacrificed their lives in terrorism. He, on the occasion, felicitated labourers and workers of Taxila on behalf of Prime Minister Shehbaz Sharif and Chairman of Pakistan People’s Party Bilawal Bhutto Zardari. He appreciated tireless efforts and hard work of the team of Workers Welfare Fund who within short span of time completed the project to deliver.

The Minister further said that this government neither makes tall claims nor false promises of giving millions of jobs and millions of houses but believes to work, work and work on ground. He said “Bread, Cloth and Shelter is the promise of PPP and PPP is fulfilling this promise”. He said a country progresses if its labourers are happy and we will take every step for the rights of our labours for a happy, peaceful and progressive Pakistan.

He said labour productivity drives economic growth that leads to a highly productive economy and we have to provide better working environment for our working class. He said that soon after taking charges as Minister, he had clear instructions to complete the colonies within few months so that flats could be handover to the workers. The Minister said that previously, he inaugurated residential flats for the labourers of Baluchistan and in other cities, the completion work on the colonies is in progress and will be inaugurated soon. He assured provision of all basic facilities in labour colonies.

He said in each labours colony mosques, community centers, working folk Grammar schools, BHUs and Vocational centers will be opened for children and families of labours. Minister of State Saleem Haider also addressed the ceremony and highlighted the role of PPP in empowering the working class of Pakistan. He said this complex was brainchild of Pakistan Peoples Party. He appreciated the Federal Minister Sajid Hussain Turi for his tireless efforts to compete and handover flats to the workers.