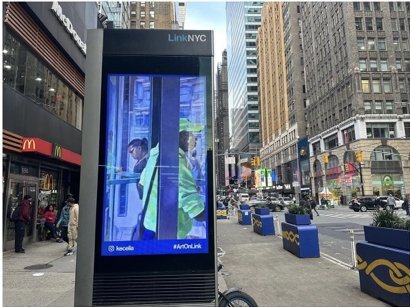 ISTANBUL (AA): These days, a Turkish artist’s oil paintings have been adorning New York’s billboards for the first time in history.

As part of the promotion and effort to support local artists in New York, nine paintings by Sanem Altaylı have been chosen to be featured on billboards from among thousands of applications.

Altaylı became the first Turkish artist to have their works featured on New York billboards.

The works selected are displayed on nearly 2,000 billboards in five city districts.

Altaylı, whose charcoal drawings and works have been exhibited in Washington and Azerbaijan before, told Anadolu Agency (AA) that she is pleased to have her pieces displayed on billboards in New York, where she has lived since 2018.

“I would constantly get excited when I saw someone’s paintings on billboards. I am proud to see my paintings there as the first Turkish artist. I’ve been collecting my paintings for four years, and my application has finally been accepted. It is nice to see my art pieces as I walk in a city like this,” Altaylı said.

Explaining that her works portray reflections and crowds that everyone sees but most don’t pay attention to in daily life, Altaylı added, “I am very impressed by shapes distorted by reflections. New York is already a colorful city. Everywhere I look, I see something and want to share that with people. I wanted them to be permanent.”

An exhibition, “Distractions,” which includes Altaylı’s oil paintings, has also been organized for art lovers at the Turkish House (Türkevi) in New York.

The exhibition is scheduled to remain open until Dec. 30.