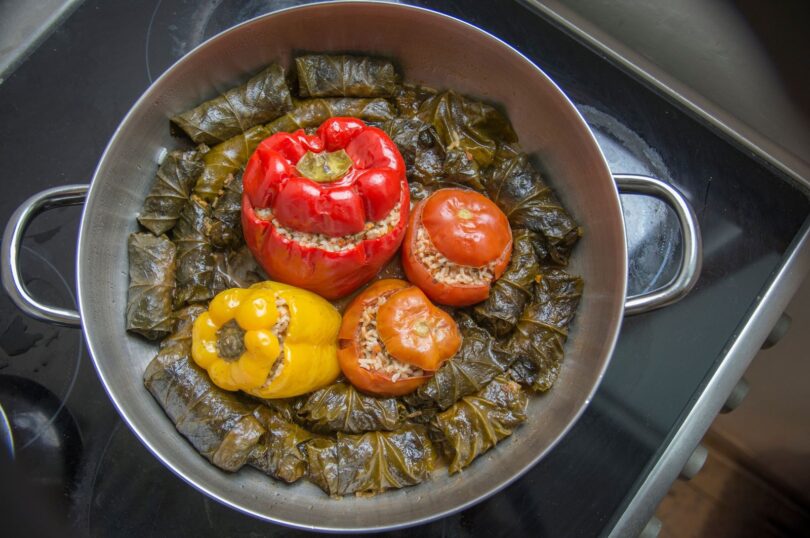 When you hollow out something and fill it with different ingredients, the combination, which is sometimes a vegetable, fruit, leaf or seafood, can be quite extraordinary. In Türkiye, it’s a go-to dish we call ‘dolma’

When it comes to Turkish cuisine, perhaps one of the most important flavors that come to mind is dolma – a family of stuffed dishes dating back to the Ottoman Empire and literally translates as “stuffed.” As a matter of fact, it is a delicious dish that you can find in cuisines from the Balkans, the South Caucasus, Central Asia, the Mediterranean, the Aegean and the Middle East.

Whatever you can think of, from cabbages to fruit, if it can be hollowed out and filled with stuffing such as rice, bulgur or meat, then it is good for dolma. All you have to do is decide what you will fill it with. Although it seems like an easy dish to prepare, its flavor is something that cannot be understated.

Let’s see what varieties of this dish are made in Türkiye, which can be made using many different vegetables, fruits, seafood and even leaves.

When it comes to dolma, one of the first examples that come to mind for many people is stuffed peppers. This dish, which is stuffed with a mixture of rice cooked with various spices into red or green peppers, can be served cold or hot.

Stuffed peppers, which can also be made by adding minced meat, are usually served hot, but the meatless variety made with olive oil can also be eaten cold. Stuffed peppers are a dish that often decorates the tables of every Turkish family. Even for those who live far from their families, the stuffed pepper variety is often a comfort food.

There are also different cooking methods for variety. Minced meat is not added to the stuffed pepper cooked in the oven, which is generally the Balkan style. However, those boiled in water in a pot are usually paired with minced meat.

Peppers are the most popular vegetable for stuffing, but there are also a few other interesting options.

This stuffing method, which is done using dried or fresh aubergines, or eggplants, is filled with a stuffing whose main ingredient is rice. As with stuffed pepper, stuffed aubergines can be cooked in the oven or boiled in a pot. Stuffed eggplant, which is often seen as a competitor to stuffed peppers, can be even more delicious when prepared by crafty hands.

Onions, which are included in almost every dish, appear as the main ingredient this time. When onions are stuffed with spicy rice, delicious stuffing is the result. I think this variety is a type that will make even those who don’t like onions fall in love.

Now I’m going to tell you about a treat that is small enough to eat in one bite but possesses an impressionable flavor. Mostly made in the Aegean and Mediterranean regions, the bright yellow flowers of zucchini plants are collected in the morning and stuffed fresh while they are still open. Although it is a bit difficult to gather the ingredients and prepare, the flavor hits your palate the moment you put them in your mouth is worth the inconvenience.

Another stuffed dish from Aegean cuisine, which is full of healthy dishes, is stuffed artichokes. This healthy vegetable is hollowed out and filled with a mixture enriched with green herbs, the main ingredient of which is rice or bulgur. The herbs used in Aegean cuisine especially enrich the stuffing of this dolma. The stuffing is made by adding dill, fresh mint, parsley and fresh onion, which makes it quite fresh.

So, you’re thinking “how can seafood be good for stuffing?” In fact, perhaps one of the most delicious dolma varieties is stuffed mussels. Again, the main ingredient is rice, enriched with spices, and sometimes sweet ingredients such as currants are added as well. This is placed on top of cleaned, cooked mussels inside the shell, the shells are then put back together and cooked again.

You have to open the mussel shells again when eating. It is eaten by squeezing plenty of lemon over the stuffed mussels, in which the mussel meat and the prepared rice stuffing are cooked together. This dolma type, which is generally considered street food and used in competitions to determine how many you can eat in one sitting, is very popular in many coastal cities of Türkiye.

Of course, this beautiful and vitamin-rich fruit, which adorns our kitchens when winter dawns, is not only used in desserts. Quince, a fruit that you can turn into a main dish, can be one of the unforgettable treats of your table with its rice stuffing added to it.

This variety, known by some as sarma or wrapping, and described by others as dolma or stuffing, is perhaps one of the most difficult but most delicious offerings of Turkish cuisine. Turkish people have a very special place in their hearts and stomachs for sarma. It’s rare to find someone who doesn’t like it.

Flavors such as currants, pine nuts and cinnamon can also be added to its filling, the main ingredient of which is rice. The rice enriched with different spices is spread on the leaves and prepared by folding the leaves into neat rolls.

Stuffed leaves, which can also be eaten cold with olive oil, are a popular dish in almost every region of Türkiye. There are also different types of stuffing made using leaves in this manner. For example, they can be made with leaves such as black cabbage and chard.

Many varieties of dolma are served with yogurt on the side or on top in Türkiye. In my opinion, yogurt is the wingman of many types of dolma. In particular, I can’t imagine stuffed peppers and stuffed leaves without yogurt.

As you can see, dolma is a kind of food that can be made from many things.

When you go to the market or the bazaar, you can ask yourself the question of whether something can be stuffed while browsing the products in the aisles. If you are thinking about what to cook tonight, you can make one of the stuffings above, or you can create a different dolma you can prepare by buying any product suitable for stuffing.