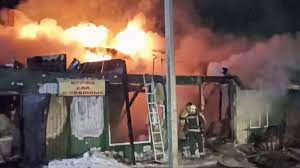 MOSCOW (AP): Russia’s emergencies ministry said Saturday that 20 people were killed in a fire at a nursing home in the Siberian city of Kemerovo.

The fire broke out before dawn in the two-story wooden building in the city 3,000 kilometers east of Moscow.

The cause was not immediately determined but news reports said the building was heated by stoves.

It was not clear how many people lived at the privately run facility or how many were in the building when the fire started.