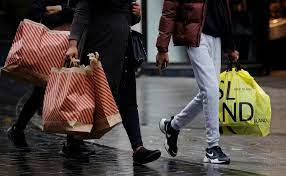 LONDON (Reuters): British retail sales slid unexpectedly in November, despite the soccer World Cup and the Black Friday sales promotions, a potential indication of the stress felt by many households as the cost-of-living crisis eats into their finances.

Retail sales volumes dropped by 0.4% in November after a 0.9% rise in October which had represented a bounce from September when sales were affected by a one-off public holiday to mark the funeral of Queen Elizabeth.

A Reuters poll of economists had pointed to a 0.3% rise from October.

“The fact that not even the World Cup and Black Friday Christmas shopping could produce an increase in sales will come as a major disappointment to retailers, especially considering the increase last month,” said Lynda Petherick, retail lead at consultancy group Accenture in the UK and Ireland.

The Office for National Statistics (ONS) said some of the drop could reflect how the data did not include “Cyber Monday” online sales which fell on Nov. 28, which will be included in December s figures.

Still, Friday s figures were consistent with other signs that consumers are struggling. Retail sales volumes fell to 1.5% below their 2019 level.

The latest readings of Britain s economy came a day after the Bank of England raised interest rates for the ninth meeting in a row and indicated more hikes were likely.

But investors said the central bank might be getting close to the end of its increases in borrowing costs as inflation shows signs of having peaked and the economy appears to have entered a recession.

Compared with a year earlier, retail sales in November were 5.9% lower, the ONS said, a slightly steeper fall than forecast in the Reuters poll.