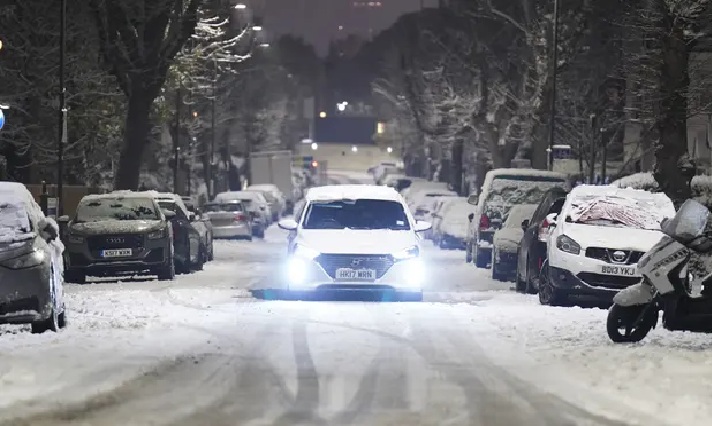 LONDON (Agencies): Drivers and passengers in large parts of Britain faced difficult journeys on Monday morning after the UK’s coldest night of the year so far, with temperatures in Scotland dipping below -15C.

Snowfall in south-east England closed motorways and major roads, and left some of the busiest commuter railway networks struggling to function.

Airports were operating but with delays due to ice and fog.

National Highways said it had reopened all motorways in the south-east after many, including the M25, were blocked in places by snow and accidents.

The M25 orbiting London had been closed for several hours in Hertfordshire because of jackknifed lorries. Gritters, snow ploughs and emergency services have reopened all roads in the region. National Highways urged motorists to continue driving with care because of icy conditions.

The AA president, Edmund King, said the number of breakdown callouts was about 25% higher than normal. The AA urged drivers to check fuel levels and take warm clothing, a charged mobile phone, food and drink – and to drive slowly if they must travel and leave a much longer distance from the vehicle in front.

On the railways, the wintry conditions mainly affected services in the south-east, with several inches of snow overnight around London, Anglia and Kent. Southeastern trains issued a “do not travel” warning on Monday morning and there was also significant disruption on services run by Greater Anglia, South Western Railway and Southern.

Early train services were disrupted around Edinburgh when icicles in a tunnel caused signalling failure. All East Midlands Railway trains were delayed due to a freight train having derailed at low speed and blocking the line.

Tube trains in London were delayed and disrupted, particularly the outer network as ice and snow caused equipment failures on several lines.

Network Rail said the first early morning trains were likely to be most affected by freezing weather but most services around Britain outside the south-east were running normally, on the first day of a new weekday timetable, after the official changeover of schedules on Sunday.

Services across Britain will be more disrupted from Tuesday because of rail strikes, with RMT members at Network Rail and 14 train operators stopping work for two 48-hour stretches on 13-14 and 16-17 December.

Gatwick and Stansted airports temporarily closed their runways on Sunday to clear snow and passengers were warned about the potential for further delays on Monday. Gatwick was the worst affected, according to data from Cirium, cancelling 91 flights at the weekend and dozens more on Monday morning.

The disruption to transport services on Monday came after the temperature in Braemar, Aberdeenshire, plunged to a 2022 low of -15.7C overnight, according to the Met Office.

The Met Office issued yellow severe weather alerts due to the wintry conditions. Among locations with fresh snow on Sunday were Andrewsfield in Essex (9cm), Charlwood, Surrey (5cm) and Herstmonceux, East Sussex (4cm).

The Met Office meteorologist Rachel Ayers said: “It will continue to be a very cold day, with maximum temperatures of 1-4C on Sunday and, as we head into the evening, we see persistent rain, sleet or snow in the far south-east of England, which is what we have a yellow warning out for from 6pm on Sunday.

“We could see 2cm to 5cm of snow, perhaps up to 10cm in some places, with Kent and Sussex most affected, with areas most exposed such as North and South Downs and higher ground going to see the more significant accumulations.

“There will be ice forming, particularly near to the coast where there is rain and sleet, and freezing temperatures which could cause some travel disruption to start Monday with that valid until 9am.”

Ayers said although cold temperatures, freezing fog and wintry showers were expected through the week, cloud cover could prevent some of the more extreme temperatures experienced in recent days.

She added that there was a possibility of slightly milder conditions arriving next weekend but it was too early to be certain.

Police warned people to continue to avoid open water after three children died and another remained in a critical condition after being rescued from a lake in Solihull in the West Midlands on Sunday afternoon after falling through ice.

Richard Stanton, the area commander for West Midlands fire and rescue service, said: “We know the weather forecast for the next few days is expected to be bitterly cold. Please, adults and children alike, stay away from open water. Under no circumstances venture on to ice regardless how thick or safe you think this ice may be.”