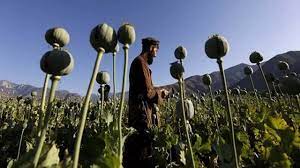 KABUL (Khaama Press): On Monday, a British University, Cranfield, released a statement indicating a research partnership with United Nations. The report said that the researchers from the University would work on a research project to help the United Nations develop artificial intelligence (AI) to support the monitoring of illegal opium production in Afghanistan.
In this research program, the researcher will use artificial intelligence to interpret satellite imagery, tracing where the crops are used for drug production in Afghanistan. The partnership between the University and UN lasts until July 2023, said Daniel Simms, Cranfield University lecturer.
The report shows that Afghanistan is still the largest producer of poppy cultivation globally. The total area is estimated at 233,000 hectares, mainly concentrated in the southwestern parts of the country, approximately 73-80%, Reported by UNODC in 2022.
The research programs will automate the process using AI, enabling the monitoring of the extent and evolution of poppy cultivation in the country and helping the government tackle the issue of these crops.
The United States government has invested more than $8.62 billion in counternarcotics operations in Afghanistan over the past 20 years. Despite the investment, the country continues to be the world’s top producer of opium, according to SIGAR.
The drug trade, on the other hand, is regarded as one of the major barriers to rebuilding and development in the country and has weakened security by funding insurgent organisations, according to the research.
The report shows that since the Takeover of Afghanistan by the Taliban (IEA) in August 2021, opium cultivation increased by 32%, or 56,000 hectares, compared to the previous year, UNODC.
The reasons that the previous government could not take meaningful actions in fighting narcotics, drug cultivation and production in Afghanistan; were the lack of the rule of law and security.