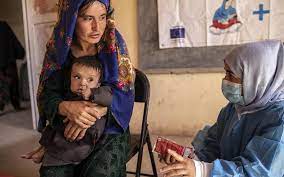 KABUL (AP): A senior UN official in Afghanistan met on Sunday the deputy prime minister of the Taliban-led government to discuss a ban on women working for non-governmental groups that Afghan authorities have announced in a series of measures rolling back women’s rights.

The decision by the Taliban government to bar women from NGO work has prompted major international aid agencies to suspend operations in the country. The ban has raised fears that people will be deprived of food, education, health care and other critical services, as over half of Afghanistan’s population needs urgent humanitarian assistance.

Aid agencies have warned the ban will have catastrophic consequences and “hundreds and thousands” of Afghans will die because of the Taliban decision.

The deputy head of the UN Mission in Afghanistan, Potzel Markus, met Maulvi Abdul Salam Hanafi in the capital Kabul to discuss the ban, as well as other measures including barring women from universities.

“Banning women from working in non-governmental organizations, denying girls and women from education and training, harms millions of people in Afghanistan and prevents the delivery of vital aid to Afghan men, women, and children,” the UN mission said.

Potzel is the latest UN official to meet the Taliban’s leadership amid mounting international concern over the curtailing of women’s freedoms in Afghanistan.

Hanif issued the NGO ban on Dec. 24, allegedly because women weren’t wearing the Islamic headscarf, or hijab, correctly. He said any organization found not complying with the order will have its license revoked.

Aid agencies have been providing essential services and support in the face of a worsening humanitarian crisis in Afghanistan.

The Taliban takeover in 2021, as US and NATO forces were in the final weeks of their pullout after 20 years of war, sent Afghanistan’s economy into a tailspin and transformed the country, driving millions into poverty and hunger. Foreign aid stopped almost overnight.

Sanctions on the Taliban rulers, including a halt on bank transfers and the freezing of billions in Afghanistan’s foreign assets have already restricted access to global institutions. Funds from aid agencies helped prop up the country’s aid-dependent economy before the Taliban takeover.

UN aid chief Martin Griffiths is due to visit Afghanistan to discuss the ban.

Potzel’s meeting with Hanafi came as a UN survey showed that a third of NGOs headed by women in Afghanistan have been forced to stop 70 percent of their activities due to the ban and around a third have stopped all their activities.

The UN Women’s Department said 86 percent of the 151 organizations surveyed have either stopped or are functioning partially.

It also said the lack of women in the distribution of aid has had a significant impact on the Afghan population.