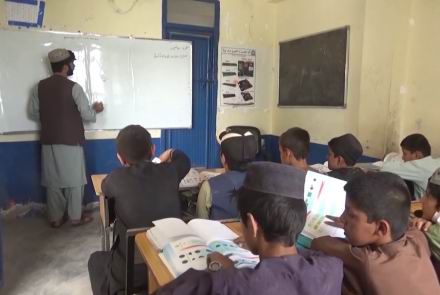 URUZGAN (TOLOnews): Officials of the education department in Uruzgan said that UNICEF in the past year held one thousand classes for girls and boys in the province.
They added that with these classes 35,000 students have been provided with educational opportunities in this province. “Foreign institutions have made nearly one thousand classes in this province,” said Khirullah Haqnuma, head of the education department in Uruzgan.
Meanwhile, some students who studied in these classes asked officials to establish schools for them.
“UNICEF provided these classes for us, and we study our lessons here,” said Matihullah, a student.
“We don’t have schools here and we study here… and I am in third class,” said Zabihullah, a student.
“We asked for the reopening of our schools so we can go to our schools and study,” said Hadia, a student.
Meanwhile, some Uruzgan residents welcomed UNICEF’s providing these classes and asked the government to reopen schools for girls.
“We need educated women, we need female doctors, especially in our province,” said Jamaiullah, an Uruzgan resident.
“They have to put attention on girls’ education above grade six and build schools in the districts so that they are not deprived of education,” said Ahmad Jawed Khapalwak, a civil activist.
As a result of the war in previous years, 32 schools were destroyed in Uruzgan.