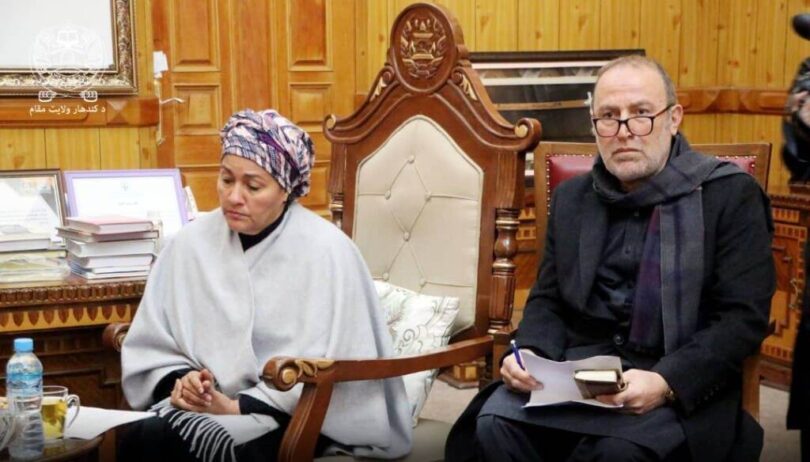 KABUL (Khaama Press): The United Nations delegation has warned the Islamic Emirate authorities that isolating women would lead to the isolation of Afghanistan as the country is already faced with a catastrophic humanitarian crisis, according to reports.
A high-level UN delegation traveled to Afghanistan this week and met with high-ranking de facto officials of the country aimed at ensuring the protection of women’s rights and girls’ rights amid the growing concern over the alienation of Afghan women from public life.
The UN legal experts called on the Taliban authorities to prioritize protecting the rights of women and girls under any circumstances and urged the international community to support Afghan women during these critical times.
The UN delegation that visited Kabul included Deputy Secretary-General Amina Mohammed, the Executive Director of UN Women Sima Bahous, and the Assistant Secretary-General for UN political, peacebuilding, and peace operations Khaled Khiari.
The purpose of the four-day visit to Afghanistan was to observe the situation, engage with de facto authorities and highlight the UN solidarity with the Afghan people, the delegation in a statement said on Friday afternoon.
Meanwhile, the senior UN team will share their findings and recommendations with all member states, which may influence global policies towards Afghanistan in the short and long terms.
“The recent bans issued by the Taliban caretaker government restricting women and girls from educational institutions and workplaces is of great concern for the UN. Indeed, these restrictions are isolating Afghanistan itself in the midst of a terrible humanitarian crisis,” Deputy Secretary-General Amina Mohammed said.
Ms. Bahous, the third executive director of UN Women, said, “what’s happening in Afghanistan is a grave women’s rights crisis and a wakeup call” for the international community.
The UN delegation’s message is crystal clear to the Taliban authorities regarding the violation of the rights of women and girls in Afghanistan, with serious ramifications if the situation does change for the better.