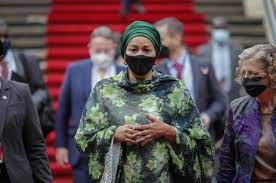 Since returning to power 17 months ago, the Taliban have imposed severe restrictions on women, keeping them out of government jobs, banning them from secondary schools and universities, and prohibiting them from visiting parks.

Also attending is Khaled Khiari, a senior official of the UN Department of Political Affairs, Haq said, declining to give further details of the visit citing security reasons.

Before arriving in Afghanistan, the delegation held talks in several countries in the region, the Gulf, Asia and Europe to discuss women s and girls  rights and sustainable development.

The UN officials were urged to convey “the urgency of the situation,” the spokesperson said, noting a “clear consensus… on the issue of women s and girls  rights to work and have access to education.”

The visit follows the weekend slaying of a former Afghan lawmaker who was killed at her home in Kabul, a murder that “shocked” Guterres, another spokesperson said.

At least three of them partially resumed their activities after receiving assurances from the Taliban authorities that women could continue to work in the health sector.

The UN decided to continue its operations.