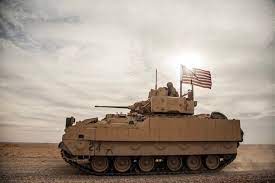 WASHINGTON (AFP): The United States on Friday announced a major military assistance package for Ukraine that is valued at more than $3 billion and includes 50 Bradleys and dozens of other armored vehicles.

The assistance — $2.85 billion drawn from US inventories and $225 million in foreign military financing — does not include advanced Western tanks sought by Kyiv, but will still provide significant additional firepower for its forces.

It is “the largest security assistance package in total value that we have committed so far,” Deputy Assistant Secretary of Defense Laura Cooper told journalists.

The marquee items in the package are the Bradleys, which come with 500 TOW anti-tank missiles and 250,000 rounds of ammunition for their 25mm autocannons.

“The Bradley vehicles will further enhance Ukraine’s ability to conduct complex maneuvers in almost all weather conditions and terrain, especially in the south and the east of the country,” Cooper said.

The self-propelled howitzers “will provide greater protection and maneuverability” than previously provided artillery pieces that must be towed by vehicles, Cooper said.

The equipment will complement expanded US training for Ukrainian forces starting this month that will focus on larger-scale maneuvers, she said.

“We are positioning Ukraine to be able to move forward and retake territory,” Cooper added.

Ukrainian President Volodymyr Zelensky hailed the new package as “timely and strong.” It brings total US military assistance since Russia invaded in February 2022 to more than $24.2 billion.

“For the first time, we will get Bradley armored vehicles — this is exactly what is needed. New guns and projectiles, including high-precision ones,” he said in his evening address.

Washington and Berlin announced the previous day that they would provide armored vehicles — Bradleys from the United States and Marders from Germany — but did not provide details.

Berlin said Friday that it would send about 40 of the Marder vehicles to Ukraine within weeks, and that training on them would be provided in Germany.

Ukraine has long pushed for heavier weaponry, including tanks, that would aid its operations. Western nations have been reluctant to send them, citing fears of becoming further drawn into the war or provoking Russia.

But the Ukrainians have built momentum and Western nations have been expanding the weapons they send them.

The US-German announcement on the armored vehicles came after France promised to deliver its AMX-10 RC light tanks, which are wheeled rather than tracked but have a much heavier cannon typical of a tank.

The French move put Germany under fresh political pressure to do more to help Ukraine.

Germany also said Thursday that it would follow the United States in sending a Patriot missile battery to Ukraine, meaning Kyiv’s forces are slated to receive two of the advanced air defence systems.