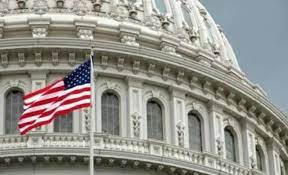 WASHINGTON (AFP): US lawmakers approved a sweeping annual spending package Friday that includes $45 billion in Ukraine aid and reforms to election law aimed at avoiding a repeat of last year’s assault on the Capitol.

The $1.7 trillion blueprint passed by senators on Thursday was rubber-stamped by the House of Representatives just hours ahead of a midnight deadline to keep the federal government open — although a damaging holiday season shutdown was never a serious threat.

“This bill is further proof that Republicans and Democrats can come together to deliver for the American people, and I’m looking forward to continued bipartisan progress in the year ahead,” President Joe Biden said in a statement welcoming the vote.

Failure to get the package to Biden’s desk would have been an embarrassment, days after his Ukrainian counterpart Volodymyr Zelensky visited the White House to argue for the $44.9 billion emergency military and economic aid proposed as part of the legislation.

But it ultimately enjoyed a smooth passage through the lower chamber, where Democrats have a slim majority for a few more days, until the Republican-led 118th Congress opens for business.

Nine Republicans crossed the aisle to help the package cross the line by 225 votes to 201, while one Democrat — New York progressive Alexandria Ocasio-Cortez — voted no.

“In this legislation, we proudly deliver another consequential round of security, economic and humanitarian aid,” departing House Speaker Nancy Pelosi said in what is almost certainly her last speech as the nation’s top lawmaker.

“And it really is not — as the president of Ukraine said the other night — about charity. It’s about security, it’s about working together.”

The giant bill keeps the lights on until next October, paying for almost every aspect of the day-to-day management of the federal government, from law enforcement to printing money.

But it also features add-ons less obviously connected to funding, such as a reform tightening a 19th century law to make clear that vice presidents do not have the power to overturn elections.

Defeated president Donald Trump exploited the loose wording of the text to argue that his deputy Mike Pence could halt the transfer of power after the 2020 election, amid bogus claims of voter fraud.

Pence rebuffed Trump’s entreaties and the billionaire Republican’s vilification of his vice president was the cornerstone of his speech that allegedly incited a mob to storm the US Capitol on January 6, 2021.

Trump, who has launched a run to regain the White House despite being the focus of several criminal and civil investigations, released a statement Thursday describing the package as a “monstrosity… crammed with left-wing disasters.”

House Minority Leader Kevin McCarthy had also urged his party to vote no, arguing that his side would have more sway in negotiating the size and scope of federal spending when they wrest the lower chamber from the Democrats in early January.

The House was half empty Friday, with more than 200 representatives using an absentee voting provision, strictly meant only for those with Covid-19, to stay home and cast their ballots by proxy.

Republicans there in person lined up to bemoan the lack of time they had been given to study the bill — it was finalized just three days ago — and the “woke” previsions it contained, such as funding for LGBTQ projects.

There were rumors circulating among congressional staffers and media that McCarthy would use his so-called “magic minute” privilege to spend hours lambasting the bill.

McCarthy held up a budget vote in November of last year with a rambling address lasting a record eight-and-a-half hours.

But he took pity Friday on colleagues trying to get home amid a massive winter storm, reining in his criticism of the legislation to just 25 minutes.

“We are two days away from Christmas,” he said.