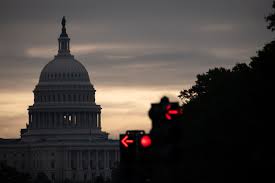 WASHINGTON (AFP): Negotiations to ward off a US government shutdown went into overdrive Tuesday, with lawmakers struggling to craft a temporary budget bill that needs approval by Friday to avoid paralysis of federal services.

Democrats unveiled a text which would extend federal spending at current levels until December 23. It could be voted on in the House of Representatives as early as Wednesday.

There is growing urgency, since members of Congress have until midnight Friday to adopt a new budget, otherwise all funding for federal services will be cut and operations across swathes of the government will screech to a halt.

Departments and other federal buildings but also national parks, some museums and a multitude of organizations would be impacted, forcing the furlough of hundreds of thousands of federal workers.

A winter 2018-2019 shutdown, the longest in US history, even affected baggage screening at airports.

Despite strong partisan divisions, most elected officials on both sides do not want a shutdown, which risks creating chaos before the holidays.

The two parties are currently unable to agree on a final budget for the fiscal year 2023.

“While we are close to a final agreement to create American jobs, help working families with the cost of living, and protect our national security, we need additional time,” said the leading Democrat in the talks, congresswoman Rosa DeLauro.

The temporary budget bill would give Congress another week to reach a compromise.