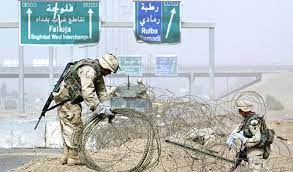 WASHINGTON (AP): The Navy’s next amphibious assault ship will be named after the city of Fallujah, which saw some of the bloodiest battles in the Iraq war when US Marines fought Al-Qaeda extremists in deadly house-to-house combat.

Navy Secretary Carlos Del Toro said the USS Fallujah will commemorate what have become known as the “First and Second Battles of Fallujah,” following the tradition of naming the assault ships after Marine Corps battles or other early sailing ships and aircraft carriers.

“It is an honor to memorialize the Marines, soldiers, and coalition partners that fought valiantly and those that sacrificed their lives during both battles of Fallujah,” Del Toro said in a statement Tuesday.

Located about 65 kilometers from Baghdad, the city became the base for an anti-government Sunni insurgency after the US-led invasion in 2003 toppled Saddam Hussein. Al-Qaeda militants, who rose up against the Shiite-dominated government in Baghdad, fought two bloody battles with US troops in Fallujah in 2004 that killed more than 100 Americans and wounded more than 1,000.

The first battle of Fallujah was triggered by increasing violence in the city including the deaths of five US soldiers hit by a roadside bomb, and four security contractors working for Blackwater USA. The contractors were killed and their bodies set on fire. Two of the corpses were hung from a bridge, and photos of the carnage were distributed to media.

In response, Marines battled for days to get control of the city, and in a turning point, a Marine vehicle was hit by a rocket-propelled grenade fired from a mosque, wounding five Marines. US forces converged on the mosque and eventually fired a Hellfire missile at the base of its minaret, and an F-16 fighter jet dropped a 500-pound bomb, killing dozens and fueling anti-American sentiment. Within a month, however, US forces withdrew from Fallujah and turned control over to local Iraqi security forces.

The second battle came in November 2004, and was a massive air and ground offensive by US forces, along with British and Iraqi troops, to take control of the city. Dozens of Americans and hundreds of militants were killed and large sections of the city were damaged and destroyed.

An Iraqi journalist in the city at the time said, “People are afraid of even looking out the window because of snipers. The Americans are shooting anything that moves.”

Gen. Richard Myers, who is now retired but was chairman of the US Joint Chiefs of Staff during that time, said that “hundreds and hundreds of insurgents” had been killed and captured. He said the Fallujah offensive was “very, very successful” but wouldn’t finish the insurgency.

“If anybody thinks that Fallujah is going to be the end of the insurgency in Iraq, that was never the objective, never our intention, and even never our hope,” he said.

A decade later, the city once again became a deadly hotbed of insurgency as the Daesh group swept control, starting its dramatic blitz across Iraq. It took nearly two years, and the entry of US forces back into the country to rebuild the Iraqi military, to retake the city in a crucial step toward ousting Daesh militants from major Iraq cities.

In addition to announcing the ship’s name, Del Toro said the sponsor for the future USS Fallujah will be Donna Berger, who is the wife of Marine Commandant Gen. David Berger.