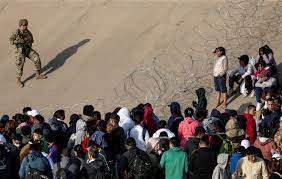 WASHINGTON (AFP): The US government’s two-year-old policy of invoking Covid-19 precautions to turn away hundreds of thousands of migrants at the Mexican border will remain in place for now, the Supreme Court ruled Tuesday.

The decision to uphold the controversial rule known as Title 42 delayed a looming political crisis for President Joe Biden, as thousands waited at the southern border in expectation the policy was about to end.

But the conservative-dominated high court accepted a petition from 19 states warning of a surge of migrants should the policy introduced under former president Donald Trump in March 2020 be lifted as ordered by a lower court.

The Supreme Court said Title 42 — which allows the swift expulsion even of people who might qualify for asylum — would remain in place pending its ruling on the issue, and that it would hear the case in February.

“The states contend that they face an immigration crisis at the border and policymakers have failed to agree on adequate measures to address it,” the court said in its 5-4 ruling.

“The only means left to mitigate the crisis, the states suggest, is an order from this Court directing the federal government to continue its Covid-era Title 42 policies as long as possible.”

The ruling could give the Biden administration, which had conceded that Title 42 was wrong and prepared for a surge of asylum-seeking migrants, until May or June before a final decision.

Departing the White House for vacation Tuesday night, Biden told reporters that ending Title 42 was “overdue,” but the administration would heed the court’s decision until a final ruling is made, likely in June.

“In the meantime, we have to enforce it,” Biden said.

White House spokeswoman Karine Jean-Pierre said earlier in the day the administration would prepare for the next hearing.

“We are advancing our preparations to manage the border in a secure, orderly, and humane way when Title 42 eventually lifts,” Jean-Pierre said in a statement.

“Title 42 is a public health measure, not an immigration enforcement measure, and it should not be extended indefinitely.”

Louisiana Senator Bill Cassidy said that removing Title 42 “would have made our border crisis worse, and the White House seemed willing to let that happen.”

“Glad to see the Supreme Court step in to preserve it, but we need a permanent solution,” he said on Twitter.

– From Cuba, Venezuela and beyond –

While the government had prepared for the end of Title 42 with more staffing and more fencing along the border, it was not clear how it would have stemmed an expected surge.

Some 2.5 million people were intercepted while trying to cross the southern US border in the 12 months through November.

While two years ago most of the migrants were from Mexico, Honduras, Guatemala and El Salvador, now more than half come from much further away — from Nicaragua, Venezuela, Cuba, Eastern Europe and Asia.

Ballooning migrant numbers at the border pose an increasing political headache for Biden and his Democratic Party, whom the Republicans have repeatedly sought to paint as soft on illegal immigration.

“As a Covid control strategy, a humanitarian policy, and a border policy, Title 42 has not only failed but caused irreparable harm on a massive scale,” said Karla Marisol Vargas, senior attorney at the Texas Civil Rights Project, in a statement.

“People have continued to make the long and dangerous journey to the border, because for many Black, Indigenous, and Brown communities, the United States remains their last, best chance at survival,” she said.

Washington-based Refugees International similarly slammed the decision, saying the Supreme Court “will be responsible for what the lower court called ‘irreparable harm’ that befalls asylum seekers expelled under Title 42.”

The Supreme Court’s decision was divided mostly along ideological lines and raised fresh questions over the conservative majority’s readiness to intervene in red-hot political issues.

The petition they accepted was from 19 conservative states governed by Republicans who were not even party to the original lawsuit over Title 42.

Five conservatives comprised the majority in the decision, while conservative Neil Gorsuch sided with the court’s three progressives in opposing extending Title 42.

In his dissent, Gorsuch says he understood the concerns of border states over a surge in migrants.

However, he wrote, “the current border crisis is not a Covid crisis. And courts should not be in the business of perpetuating administrative edicts designed for one emergency only because elected officials have failed to address a different emergency.”