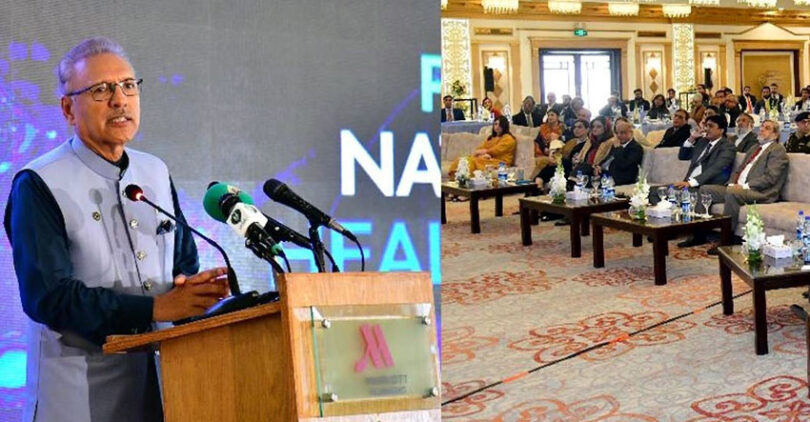 ISLAMABAD (INP): President Dr. Arif Alvi on Wednesday said that telehealth powered by digital and Artificial Intelligence-based technologies is key to provide counselling, advice and diagnosis to the masses in a most cost-effective and hassle-free manner.
He was addressing here at Pakistan’s Second Digital Health National Conference, which was attended by health professionals, information technology experts, doctors, scholars and others. President Alvi said that Pakistan was facing many challenges in the health sector, which included lack of medical professionals, poor infrastructure, high cost of health services, and lack of medical facilities in the rural areas, besides insufficient allocation of funds in the health and education sectors.
He said that these problems faced by the nation could be significantly handled by bringing in Artificial Intelligence driven telehealth and digital health initiatives which would augment the health system. This would be without incurring substantial cost by providing health services through virtual hospitals, clinics, diagnostics and promoting preventive mode of treatment which will substantially reduce the burden of diseases in the country, he added.
The president said that the incidence of Hepatitis in Pakistan was 9 percent of the total population, which made up around 20 million people whereas in Egypt, the percentage of hepatitis prevalence was 12 to 13 percent of the total population and it spent 3 to 4 billion US dollars to counter this deadly disease. He said that Pakistan being a poor country could not completely provide curative treatment but should focus on preventive measures of treatment. He said that Pakistan handled COVID-19 pandemic in a much better manner compared to many countries of the world by creating awareness regarding preventive methods and persistently conveying messages through all media of communication.
This best practice, he said, should also be copied to counter Hepatitis in country by creating awareness about the use of sterilized equipment and syringes, destroying the used syringes and promoting healthy lifestyle in the masses. The president said that the government could lay down laws and policies regarding digital and telehealth platforms for the country but the private sector had to campaign and advocate for such measures and become proactive partners for the implementation of policies and creating user friendly, cost effective and accessible health facilities to reduce the disease burden from country.