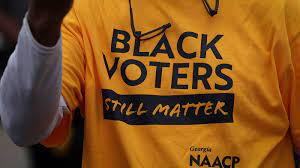 Democrats are finally prioritizing Black voters, winning notes or approval from advocacy groups who represent one of the party’s most loyal constituencies — one they say has too often been taken for granted.
The ascension of Rep. Hakeem Jeffries (D-N.Y.) to lead House Democrats as a successor to Speaker Nancy Pelosi (D-Calif.) and President Biden’s push to make South Carolina the party’s first primary state illustrate how the party is recognizing the importance of Black voters, advocates say.
“[Democrats] are fully engaging in the way that’s necessary with Black voters,” said Adrianne Shropshire, executive director of BlackPAC. “It matters where Black voters can be the margin of victory. They clearly understand the importance of making an investment and engaging with Black voters.”
During the midterms, Black voters were crucial in some of the most closely-watched races – including Georgia, where Black voters made up almost 32 percent of the turnout in the Senate runoff election that secured Democrats the 51-49 majority.
Georgia is the state that provided Democrats with their Senate majority in two 2021 runoff elections. It extended their majority to 51 seats this year when Democratic Sen. Raphael Warnock defeated Republican Herschel Walker.
Black Democrats were also critical to Biden’s win in the 2020 primary, putting him well over the top in South Carolina and contributing to his victories in a number of “Super Tuesday” contests days later.
In an October poll conducted by theGrio and KFF, 61 percent of registered Black voters identified as Democrats while 13 percent said they lean toward the Democratic Party. Only about 7 percent said they are Republicans.
According to Pew Research Center, over half of the nation’s Black population lives in the South. Iowa, which for decades held the first contest in the Democratic presidential primary, is a majority white state.
“Joe Biden recognizes this,” Trav Robertson, South Carolina Democratic Party Chair, said in an interview with The Hill.
“Forty percent of enslaved African Americans came through the port of Charleston, and 90 percent of the African American community in America can trace one relative to the state of South Carolina,” he added. “It means that while we have a troubled past, we recognize the endless possibilities.”
Despite their consistent support of Democrats, however, Black voters often report feeling unheard, disenfranchised and overlooked until election season kicks up.
That’s in part because many of the steps Democrats take — such as new appointments and even the primary move — are symbolic, said Cliff Albright, co-founder of Black Voters Matter.
In order to prove they’re truly prioritizing Black voters, Albright said, Democrats have to move toward enacting policy that addresses Black voters’ biggest concerns.
“There’s a range of issues that have not been dealt with, including the issue of voting rights,” said Albright.
Concerns around voter suppression have increased over the last few years. Since 2021, lawmakers have passed at least 42 restrictive voting laws in 21 states, according to the Brennan Center for Justice.
Between Jan. 1 and Sept. 12 of this year, seven states enacted 10 laws that made voting more difficult. Most voter suppression laws disproportionately negatively affect Black voters.
“There’s also the issue of police violence and police accountability,” Albright added. “The George Floyd Act famously went up in flames. In fact, as we speak, there’s still efforts to actually increase funding for police departments and the number of police officers on the street.”
Biden has taken steps that show he understands he owes his victory in large part to Black voters.
He promised to appoint the first Black woman to the Supreme Court, and did so with his nomination of Justice Ketanji Brown Jackson.
Albright acknowledged this sends a positive message, as does Jeffries’s ascension to House Democratic leader and Rep. Lauren Underwood’s (D-Ill.) election to the House Democratic Policy and Communications Committee. She’s the first Black female to win an elected position on the DPCC since Rep. Shirley Chisholm (D-N.Y.).
To send a louder message, Albright said Democrats need to make sure they are investing in Black communities everywhere. That includes investing money, knocking on doors and creating targeted advertising with community groups.
Shropshire, who was involved in the effort to move South Carolina to the front of the line in the Democratic primary, said the discussions she took part in focused on how a state with a diverse constituency of Democratic voters should come first.
“I do think that it is a reflection of the ways in which Black voters have shown up in critical places and in critical ways for the Democratic Party,“ Shropshire added.
“When we think about the influence or the growing political power of Black voters, the shift that’s being made is obviously an indication of that,” she continued. “I think it’s also an indication of the importance Black voters are to the Democrats winning anywhere, but particularly in difficult places and in swing states.”
In places where prominent Black figures were running this midterm cycle, such as Mandela Barnes in Wisconsin and Cheri Beasley in North Carolina, Albright faulted the party for not making the kinds of investments it should have made.
“Black voters could have proved to be the difference,” Albright said. “It’s not enough just to say we care about you as voters but to really fight for and advocate on all of these issues, whether it’s infrastructure or environmental justice or police accountability or voting rights,” said Albright. “There’s a whole agenda of issues that Black folks want to see. At the end of the day, that’s what’s going to determine whether or not we feel like we’re being truly valued and respected.”