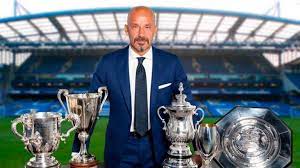 MILAN (AFP): Gianluca Vialli said Wednesday that he was taking a break from his role within the Italy national team set-up as he continues a long-standing battle with pancreatic cancer.

“After a long discussion with my brilliant team of oncologists I have decided to suspend, I hope only temporarily, my current and future professional engagements,” Vialli said in an Italian Football Federation statement.

“My goal is to use all my mental and physical energy to help my body overcome this stage of the illness so that I be ready as soon as possible to face new adventures with you all.”

Vialli was first diagnosed with the illness two years before becoming Italy s delegation chief, providing support to old friend Roberto Mancini with whom he terrorised opposition defences in Serie A during the 1980s and early 1990s.

He then won Serie A and the Champions League with Juventus before moving to Chelsea in 1996, where he was among the first wave of foreign stars who helped revolutionise the Premier League.

He played for the Blues until 1999, helping them to win the FA Cup in 1997 and being appointed player-manager following the sacking of Ruud Gullit in 1998.

Vialli went on to lead Chelsea to League Cup and European Cup Winners  Cup glory that year, winning the FA Cup again in 2000 before being sacked early the following season.

He later became a respected pundit on Italian television before joining the Italy delegation, his tearful embrace with Mancini on the Wembley pitch one of the iconic images of Italy s Euro 2020 triumph.

Vialli scored 16 goals in 59 matches for Italy but failed to replicate his often exceptional club form on the international stage.

At the height of his powers he flopped at the 1990 World Cup on home soil, shoved aside early on to make space for Roberto Baggio and Toto Schillacci, and his Italy career never really recovered.

At one point he went over two years without scoring a goal for Italy, and his final match for the national team came in 1992 when he was still in his late 20s.